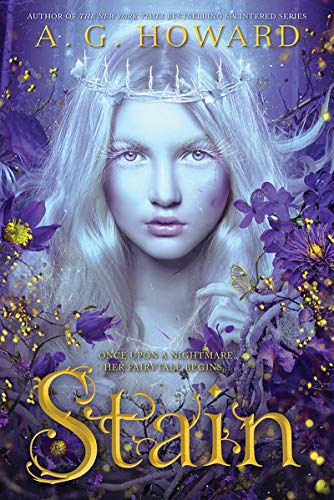 In the fairy tale mashup Stain, Princess Lyra is born with skin so pale that it burns in the sun and so delicate it bruises just by touching. With pale hair and purplish tears, she is believed to be the “moon” side of a prophecy that will unite two kingdoms. Her future husband is the sun side.

Both are born with curses only the other can lift. Lyra cannot speak and makes only a singsong noise when she tries. Prince Vesper cannot see at night. Vesper also possess a hot temper, although this may or may not be due to the prophecy.

The plot thickens as it often does in fairy tale retellings by the scheming of a wicked stepmother and three wicked stepsisters, none of whom want Lyra to inherit her throne. Lyra is eventually cast from the castle and forced to live for five years in the woods with a witch, dressing as a boy, to hide her identity until she is of age and can take back her castle.

Tropes, especially in fairy tales, can bring a great deal of comfort and help with setting. In books for children they are often fresh, as children generally have less exposure to them. Stain has the pillars of a classic fairy tale, including the overarching narrator voice, but in many ways uses tropes that have a bad taste in the modern era. Some examples follow.

Good versus evil is the deepest of fairy tale tropes; however, the coding of villains in particular is problematic throughout historical and more modern fairy tales. In a book for children in particular, it is not ideal to racially code villains, no matter how “historic” the archetype. This occurs with disturbing frequency in Stain. Princess Glistenda, blonde, has her hair turned black after she looses part of her soul:

“The creature’s jagged fingers held out a strand of Glistenda’s hair, and it became as black as the shroud’s themselves, tinting all the other strands to match. “We have marked you as ours . . .”

“Seeing the change in her hair, Glistenda worried what her insides must look like.”

Prince Vesper, who has copper skin and dark hair (from an underworld-like world), is described as wild—so wild in fact that part of him has to be cut off and hidden so he doesn’t self destruct before he finds his princess. The princess—very pale skinned—ends up taming the prince’s wild side, and it is her marking his arm that helps dispel the poison inside him.

Even throwaway tertiary characters fall prey to the “black=evil” problem:

“Nerezeth had a sorcerer of their own, Master Lachrymosa. He was at once stark and striking: a complexion of chalky white with streaks of black drizzling from his pitch-dark eyes like oil.”

The problem perpetuates along agency lines as well. For the most part, the “good” female characters in Stain are passive and lack agency (Vester’s sister a notable exclusion). Glistenda shows agency from the start in trying to get a boy to notice her, is “punished” by losing part of her soul, and then, once she gets her dark hair, becomes power hungry and starts having sex.

Agency does not equate to sexual actions and to suggest so, even subtly, in childrens’ literature, is concerning.

Stain repeatedly reinforces this message as it pits Princess Lyra against Griselda (formerly Glistenda). Griselda and the narrator often comment on Lyra’s lack of speech:

“a proper little princess, seen but never speaking, who would soon sit the throne without any effort on her part other than being born . . .” and put it at odds with Griselda’s attempt to take her own life into her hands.

The book attempts to give some agency to Lyra in the second third, in her semi-forbidden friendship with Pegasus. Unfortunately this short moment of valuing independence and grit falls flat against the overwhelming story space given to “evil” actions of the stepmother.

Lyra’s time masquerading as a boy, while a time-honored trope, also deserves some critical introspection. As this section of the book is used to showcase Lyra’s growth and budding personality, it lacks any in-depth analysis of what pretending to be a boy would mean for a teenaged girl. Little space is given to this much-needed introspection, relying more on throwaway lines like:

“Not to mention breasts so small that binding them was unnecessary as long as the clothing was baggy.”

The narrative style leaves something to be desired. Character names are often low-hanging fruit or tropes within themselves—as evidenced by the twisted old witch being named “Crony”—among others. The book is marred with info dumps and excessive narration, especially early in each chapter where off-page actions are hastily summarized. Plot lines start and stop in a jagged path to the finish and the number of POV characters feels excessive. It sometimes seems that the reader spends the least amount of time with Lyra, the title character, making empathy with her that much more difficult.

Modern words are sprinkled throughout as well, which jar the reader from the narrative. Describing hair as “buzzed” is confusing in a Western European fantasy setting, where, in theory, electric clippers do not exist.

The most dynamic female character in the book, oddly enough, is Vesper’s sister Selena. Several times she is shown protecting Vesper from physical harm, has agency without being evil, and in the end is suggested as Lyra’s protector:

“‘It might serve you not to have a man as your protector at all. Have you considered asking Lady Selena?’

“Vesper’s attention perked. ‘She is an excellent swordsman.’”

And it would be easy to argue that in a world so black and white, where one can discern how problematic someone will be by both their gender and their race, that Selena would make an excellent torn-between-worlds protagonist, fighting against racist and sexist ideology. That this is perhaps her story to be more than a lady, just buried inside the prophecy of a prince and princess.

While having the bones and atmosphere of an excellent fairy tale, Stain falls flat, and in some cases into deep holes, with its use of problematic tropes and unfortunate implications. In particular the lack of agency by Lyra in the first third of the book may be a turn off for new readers, and parents may wish to pre-read the book so as to prepare for conversations about the associations between color and morality, agency and sexual awakenings.