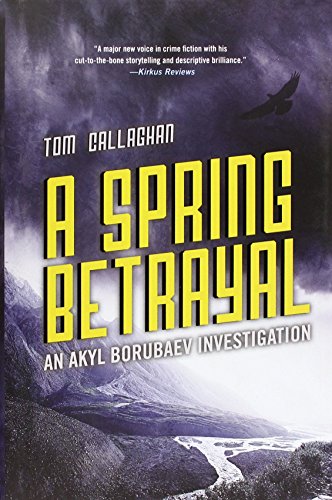 “We uncovered the last of the dead children in the red hour before dusk, as the sun stained the snowcaps of the Tien Shan mountains the color of dead blood and the spring air turned sharp and cold.”

Shakespeare couldn’t have written more compelling opening sentence than Tom Callaghan in A Spring Betrayal. In a few words Mr. Callaghan evokes the beauty of the Kyrgyzstan landscape, and the sad, grim loneliness of a crime scene. Brilliant writing.

Inspector Akyl Borubaev of the Bishkek Murder Squad, recently exiled to the small town of Karakol in a far corner of Kyrgyzstan. It is as far from the capital as it is possible to go unless one is stationed near the pass into China. It is Akyl’s reward for helping the Minister of State Security to “‘disappear’ the man who’d ordered his daughter’s murder and mutilation.”

Karakol is better than a bullet in the head which would be another way for the Minister to be certain that Akyl keeps silent. Trust in another person is very uncommon in Kyrgyzstan.

Until the seven little graves are discovered in a farmer’s potato field, crime in Karakol has been minor, mostly arresting drunks and breaking up bar fights. Now Akyl waits beside the bodies, “huddled together as if for warmth or comfort . . .” until Kenesh Usupor, Bishkek’s chief pathologist arrives.

The pathologist arrived by helicopter “Which made me wonder what was so special about a report of finding some bodies the other side of Kyrgyzstan, and who had the pull to respond so quickly.”

It is Akyl’s first hint that someone very powerful had an interest in these bodies, and that means politics is involved.

The seven children were all killed the same way but at different times, and each wears a wrist band identifying them as orphans from various state-run orphanages.

Akyl askes an old friend, Gurminj Shokhumotov, now a director of an orphanage, for assistance. Gurminj  tells Akyl that the bands identify orphans who are already grown and very much alive. He promises to contact other orphanages in an attempt to identify the little victims.

Akyl spent two years in an orphanage while his mother was away working, and his grandfather’s second wife had no intention of having him in his home. He knows first-hand how miserable a child’s life can be in one of Kyrgyzstan’s orphanages and how vulnerable they are to sexual predators.

Akyl learns the powerful person who provided the helicopter for the pathologist is none other than Mikhail Tynaliev, Minister for State Security, the man responsible for exiling him to Karakol. “I knew that since Tynaliev was involved, there was something political floating in the wind.”

Despite appearances, Akyl can’t see Tynaliev being involved in murdering chilcren. Nor does he understand why the minister orders Akyl’s wife’s body exhumed on the flimsy excuse that the case of the seven dead children is a treat to the government at the very highest levels, and “vital evidence has been concealed in your wife’s grave.”

The exhumation is cruel beyond understanding, but it is also a warning that Akyl ‘s meddling is a threat to someone.

Akyl calls Gurminj again for information on anyone in the area with a sexual interest in young children, but it is too late. Gurminj is dead, shot in the right side of the head, difficult to do when you only have a left hand. But the director left Akyl a hidden clue: the phone number of Saltanat, Umaraova, a State Security agent from Uzbekistan. “We’d never been able to completely trust each other, except with our lives.”

Saltanat  and Akyl partner up to find Gurminj’s murderer as well as the man behind the torture and murder of the seven children. Akyl steals a cell phone which has videos of horrific snuff films of a group of men raping, torturing, then murdering children. Before Akyl can act, snuff films are found in his apartment by the police acting on a tip.

Now Akyl and Saltanat are the run from the police and whatever is filming and selling videos of children being murdered. Akyl must hunt down the man behind the videos to prove his innocence.

A Spring Betrayal is not for fans for cozy mysteries, nor for anyone who prefer crime scenes to be described euphemistically. Callaghan describes crime scenes in a visceral manner, so much so that that a warning of Reader Discretion Advised would not be out of place. Callaghan doesn’t candy-coat the brutal aspects of crime.

A strong plot, a cynical but admirable character in Akyl Borubaev, and a setting unfamiliar to Americans underpin Callaghan’s brilliant writing. His use of Kyrgyzstan words that are not easily understood in context may prove a distraction to some readers, but otherwise, fans of hardcore mysteries and powerful writing will be anxiously waiting for Akyl’s next adventure.