Spoiler Alert: The Hero Dies: A Memoir of Love, Loss, and Other Four-Letter Words 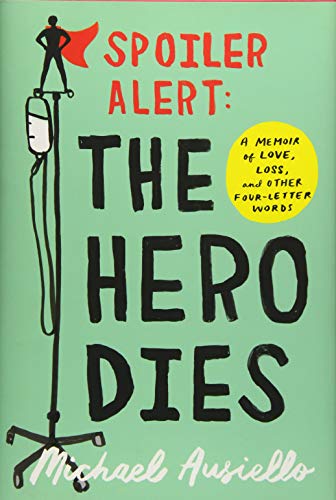 The mystery contained within the pages of Michael Ausiello’s potent memoir, Spoiler Alert: The Hero Dies: A Memoir of Love, Loss and Other Four-Letter Words, has absolutely nothing to do with the book’s ending. That is, given the title, to be considered preordained.

The mystery is, rather, that of human relationships, and of the invisible bonds that pair us off as the ministers and priests and justices of the peace say, as they make a gesture of blessing over our heads, for better and for worse.

Mr. Ausiello, a pop culture commenter of some note, admits freely right up front that, in his telling of the story of his relationship with Christopher “Kit” Cowan (the early days of which unfold in an introduction of sorts cleverly called “Previously On . . .”), two men will enter the narrative, but only one will survive to the end.

Very quickly, introductions are made and a relationship is established. But by page 42, Mr. Cowan is symptomatic and is given medical tests.

Soon, a pacing Michael Ausiello is taken back to the doctor’s office.

Our first indication of trouble is the doctor saying to him, “You should sit.”

The second is what he says next: “I’m concerned about Christopher.”

The author describes what happened next:

“‘The growth was a lot bigger than I anticipated,’ he continued. ‘And it had a hard texture. We took several pieces of it, so we will find out what it is. And we will treat it.’

“‘It may be. We won’t know until the results come back. It may be something we’ve never heard of. Whatever it is, we will treat it.’

“‘Not yet. He’s just coming out of it, and I need to go up and talk to him alone first. And then we’ll come get you. Don’t panic. Let’s see what this is and then let’s move forward.’”

Note the “don’t panic.” It’s important, as most of the rest of the book’s 300-odd pages are comprised of the author attempting to forestall panic as he watches the man he loves slowly slip away from his grasp.

Spoiler Alert is a powerful work, both as a testament to the relationship that these two men enjoyed, from first to last, and an illustration of the timeline—however short or long it may be in each individual life—of the final stages of life.

After all, each of us will have to, one day or another, hear some variation of this conversation between Kit and one of his myriad doctors:

“‘The problem is, the tumor is already at an advanced stage,’ she said.

“And then Kit stunned me by asking her, point blank, ‘What stage are we talking?’

“Prior to this there had been minimal discussion of staging. We’d never asked, and the only time it had come up—with Dr. Abbott—we’d been told that this type of rare cancer didn’t lend itself to traditional staging. I tensed up and just stared at Dr. Davis, waiting for her reply. It came quickly and without hesitation.

“‘Stage 4,’ she said, her air of sunshine and happiness now replaced by darkness and dread. I looked at Kit and his face suddenly became bright red. He smiled nervously, spontaneously letting out an ‘OK . . .’

True to his pop culture roots (Mr. Ausiello made his mark writing for TVLine), the author introduces the doctor by noting, “She didn’t look like a doctor. She looked like someone who played a doctor on television.”

In the same way, the rest of this startlingly frank, deeply sad tale is peppered with AbFab references and memories of having cameoed on Felicity back in the day, to say nothing of the guest stars who obligingly appear as themselves, most notably Veronica Mars herself, Kristen Bell.

Throughout, the author balances the bad news, worse news, and news that is still worse yet with bursts of dark humor, as here:

“One of the hospice nurses reluctantly informed me that the phlegmy noise that accompanied each one of his exhales actually had a name, albeit a colloquial one: the ‘death rattle.’ I thought she was kidding. Google confirmed to me that she was not. It described the terminal secretions like saliva that accumulated in a dying individual’s throat and upper chest. What an ugly, horrible, insensitive, crass label to attach to something so heartbreaking. Kit would’ve loved it.”

At times these quips seem like breadcrumbs that have been scattered to act as a pathway for the reader to follow through the bleak narrative landscape. At other times, they mask the full horror that is ever-present. As here, in a blog entry dated December 2, 2014:

“The decision was made today by Kit’s primary oncologist not to continue with treatment. His disease is just too widespread and aggressive at this point—it would be cruel to subject him to more torturous chemo or radiation when the likelihood of success is so slim. And I agreed. In-home hospice care will start tomorrow.

“This comes as Kit’s condition has dramatically worsened over the past 48 hours. He barely able to stay awake, he’s not eating and, most unsettling, he’s becoming increasingly confused and disoriented. The stuff that make Kit KIT is evaporating, and it’s excruciating to watch.”

It takes a certain valor to commit the full chain of memories surrounding the death of a loved one to print. And a truly gifted author to bring the work fully alive in a manner that allows neither cheap sentiment nor a sense of victimhood to sneak in. And, on a political note—I write this in the days following the historic vote of the Australian people to instruct their government of allow full marriage equality for all LGBT persons—Spoiler Alert most assuredly should lay to rest any arguments that remain as to whether or not the love bond between two men or two women is equal to that of any mixed-gender couples. If the willingness to take one’s partner from doctor to doctor, treatment to treatment, in search of a cure as well as the insistence upon making the transition from life to death for one’s partner as loving and peaceful as it can be is not proof of the most passionate and ironclad love bonds, I don’t know what is.

In fact, perhaps the best moments in the memoir are those concerning all that the two men faced in their desire to marry (as soon as that becomes legally possible) before Kit begins his chemotherapy.

It begins with a wedding ring hidden in a bag of pastry. (The author writes that, upon seeing the ring, Kit “looked up and deadpanned, ‘Oh, geez. You’re marrying me because I have cancer.’

“It was funny because, well, it was true.”

The anecdote ends with an extended scene involving the marriage license, that, were it not most assuredly completely true, would have been lifted from that Judy Garland movie, The Clock.

Would that the ability to tell it had not come at such a cost.