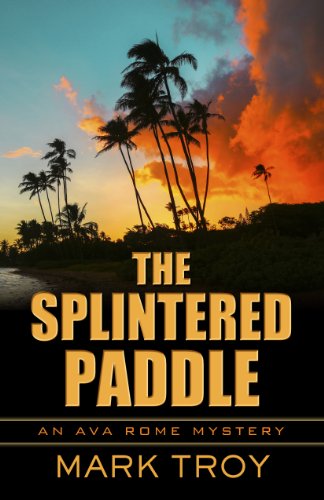 “A taut, well-written suspense novel ending in a violent confrontation . . .”

To Hawaiians, the Law of the Splintered Paddle means to protect the defenseless. It is a logo found on the emblems of the Honolulu Police Department as well as other private and governmental entities. It is found on Ava Rome’s business card “right below Licensed Private Investigator: The defenseless shall be guaranteed protection from harm.”

A former military police officer, Ava Rome grew up as an Army brat who was traumatized by two horrific events in her early adolescence: the disappearance of her father whom the Army declared a deserter, and the death of her younger brother. Both events visit her as recurrent nightmares. To Ava, her brother was one of the defenseless whom she failed to protect.

Jenny Mordan is also one of the defenseless even though her profession as a prostitute means she isn’t innocent. Even prostitutes need protection from cops who beat them as Ron Nevez did to Jenny.

As a young MP Ava was responsible for Traxler’s serving ten years in San Quentin. Now free, Traxler is stalking her with intent to murder her. The police can’t help her because according to Detective DeFranco,  “Ava, much as I’d like to, we can’t bag him up and send him away without cause. No overt threat, no permission to carry.”

With the aid of Moon Ito and other Hawaiian friends, Ava attempts to protect both Jenny Mordan and Cassie Sands, while attempting to trap the corrupt cop Ron Nevez and her stalker, Traxler. She fails at all tasks.

A taut, well-written suspense novel ending in a violent confrontation that strips the innocence from one of Ava’s defenseless clients, The Splintered Paddle by Mark Troy is Hawaiian Noir at its best.