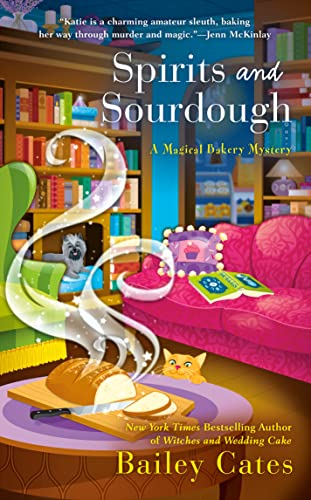 “Cates provides a story that moves along at a good pace while educating the reader on all thing’s witchery.”

Bailey Cates’s newest cozy, Spirits and Sourdough, brings hedgewitch, Katie Lightfoot, back into the investigative mode when a murder occurs, and the victim’s ghost insists that Katie must find her murderer.

The victim, Leigh Markes, is the owner of a local art gallery, and an arrogant and rude person, so her demise does not come as a total surprise to anyone.

The story is set in Savannah, Georgia, identified as one of the most haunted cities in the country, and Cates develops a group of characters with various magical skills in witchery and paranormal activities. Her characters are well designed and fun for the reader to get to know.

Cates also brings a secondary story into play with a character named Connell. He is a leprechaun spirit guard for Katie’s husband, Declan McCarthy, and Connell has been lost in the other world behind the thin veil that separates the here and now from the paranormal world.

Katie seems to be the only one who can pass through to the other side, find Connell, and bring him back to this world. If she fails, Declan may find himself in danger and unprotected. Halloween is the time when the veil is thinnest and the best time for Katie to make her move, and so the event takes place at midnight.

It should be noted that Cates keeps these two stories running parallel to each other and neither is distracting from the other.

As most cozies proceed with a secondary character assisting the primary, Cates has not followed this formula; Katie is the one to ramp up her investigation alone. Additionally, the police detective, Peter Quinn, is not portrayed as incapable. His role is not terribly strong, but Cates keeps him in the picture enough to let the reader know that the detective tries, unsuccessfully, to quell Katie’s snooping.

The murder investigation proceeds, and Katie builds strong cases against several characters: Walter Stokes, Leigh’s ex-husband who is taking over Leigh’s art gallery as well as control of his daughter’s well-funded trust; Zoe Markes, Leigh and Walter’s daughter who was estranged from Leigh; Juliette, Walter’s current wife who doesn’t like Zoe; Alessandro (Aldo) Bracket, an artist who was at odds with Leigh about his art work and her refusal to give him a show at the gallery; Paisley Long, Leigh’s assistant at the art gallery; and Calista, Leigh’s sister who was in a disagreement with Leigh about selling the family house.

Good candidates, indeed, and Katie digs deep into each character’s background to uncover the correct culprit. As the characters whittle down to the one most obvious, Cates throws a wrench into the works and surprises the reader with an unexpected ending.

Cates provides two requisite climaxes: one during the search for Connell and one when the real story emerges regarding Leigh’s murder. An interesting turn of events.

Cates has done her homework regarding witchcraft and paranormal activities. She provides a story that moves along at a good pace while educating the reader on all thing’s witchery.