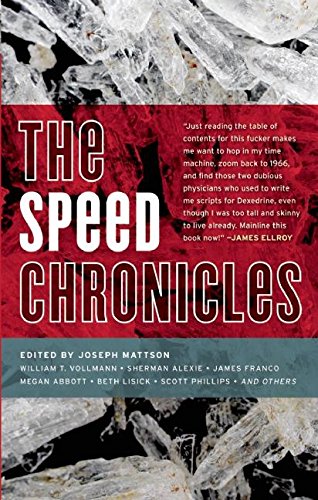 “All told, The Speed Chronicles deserves great praise for the audacity of the topic, the depth of the discussion, the diversity of its voices, and plain, old, good storytelling.”

Two tweakers (methamphetamine addicts) have only a few dollars between them. They’re hungry and in need of their next chemical jolt. A friend has a giant old television that the tweakers hope to pawn for $200. They embark on a tragic-comic quest, lugging the behemoth two miles to a pawnshop in a stolen wheelbarrow. The store manager wants nothing to do with the dinosaur television but gives them a few dollars for the wheelbarrow. It is just enough for a soda, a bag of Sun Chips, and bus tickets across town to their next adventure.

This story, “Wheelbarrow Kings” by Jess Walter, is a good example of the 14 sad, funny, and realistic stories that comprise the superb anthology from Akashic Books, The Speed Chronicles, edited by Joseph Mattson.

To his great credit, Mr. Mattson has solicited a collection of authors who treat a difficult topic –meth-amphetamine and amphetamine addiction—with great maturity.

In the book’s introduction, Mr. Mattson explains his feelings toward the drug: “Yes, it gets ugly, so ugly. But before your sex organs revert to embryonic acorns and your teeth fall out, and feasting on your malnutrition are insects for your eyes only, it’s a rush of pure euphoria and a seeming Godsend to surmount all of life’s daily tribulations.”

There are no simplistic “say no to drugs” stories in The Speed Chronicles, only mature portraits. Mr. Mattson understands that a far more profound anti-drug message is delivered this way.

The stories are united by the common theme of amphetamine and meth-amphetamine addiction and its consequences. Tweakers are often broke, smelly, undernourished, and aware of the problems they’re causing. But they cannot live without the high.

Perhaps Mr. Mattson, himself, best describes the moment that validates all the problems caused by the drug to these people: “All dials and switches cranked. The raspy throat of the city screamed like iron daggers against my eardrums and somehow it was sexy, invigorating, a mountainous delight. Compound wizards rewiring the brain to the tune of Armageddon. EVERYTHING GOES UP. I could hear a cricket jerking itself ten miles away. I was locked in.”

Yet the best moments of The Speed Chronicles are not the pyrotechnic highs, but the somber discussions of the addict’s impact on others. Two of the anthology’s most satisfying stories—Natalie Diaz’s “How to Go to Dinner with a Brother on Drugs” and Rose Bunch’s “Pissing in Perpetuity”—are subtle character sketches more about coping with tweakers than the tweakers themselves.

An additional strength of this anthology is the diversity of its authors, settings, and plots. Mr. Mattson secured stories from the famous (James Franco, Sherman Alexie) to the promising (Rose Bunch, Beth Lisick). Stories are set in New York City, large towns, posh suburbs, and different rural settings, including Indian country.

Perspectives and plot lines vary similarly: a sibling attempts to take care of his long-time addict brother; a Congressional page becomes middleman in a Capitol Hill drug ring; two speed addicts stumble into an animal-torturing tweaker cult; a young family deals with a meth lab next door; a manic mother speeds through her day preparing for a fancy dinner party; a doctor abets his patients’ amphetamine addictions. The Speed Chronicles demonstrates that although it is not always obvious, the drug is all around us.

Anthologies are inherently uneven—there are always a few stories that do not measure up to the others. The Speed Chronicles are not immune to this shortcoming. But with only two lesser stories among the fourteen, Mr. Mattson completes The Speed Chronicles with a better batting average than most anthology editors.

And, despite the diversity noted above, the stories in this anthology fit together—they belong in the same book. This is no small accomplishment; Akashic’s companion anthology, The Cocaine Chronicles [also reviewed in nyjb], is a much more unruly collection.

All told, The Speed Chronicles deserves great praise for the audacity of the topic, the depth of the discussion, the diversity of its voices, and plain, old, good storytelling.