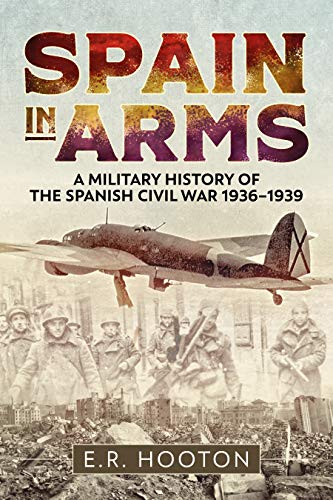 “Spain in Arms is . . . a fascinating, on-the-ground look at how this war was fought by the Nationalists and Republicans, and how it was won by Franco.”

The Spanish Civil War still retains its power to be divisive. As author E. R. Hooton mentions in the Preface to Spain in Arms, the current Spanish government “decided to exhume Generalissimo Francisco Franco’s body from his mausoleum and convert the Valley of the Fallen into a memorial for victims of the conflict.” The Valley of the Fallen once honored slain Nationalists; now it will honor all victims of the war, which of course means it will mostly remember the Republican dead.

Spain in Arms does not spend time on the political side of the Spanish Civil War, but it does at times take aim at the incorrect historiography of the conflict. Hooton eviscerates historians, most of whom are reflexively pro-Republican. The Republican myth that the Nationalists “overwhelmed” them with hordes of Moorish, Italian, and German soldiers is not true. Just like the International Brigades, which attracted foreign Communists to the Republican side in 1936, most of the Nationalist soldiers were Spanish conscripts.

Also, despite the fact that anarchist and socialist militias answered the Republican call to mobilization in high numbers when the military coup began, many of these soldiers proved inept and prone to desertion. Therefore, as the Soviet Union committed to supporting the Republican cause, by the spring of 1937, “125 of 168 battalion commissars [officials tasked with keeping the military politically correct] were Communists or secret Communist sympathizers.” Many of these commissars had a hand in the virtual intra-left civil war that decimated Republican battalions behind the lines.

These pieces of general information aside, Spain in Arms is an exhausting study of the conflict. It is a pure piece of military history. Abbreviations and acronyms clutter up every single page. Words such as “offensive,” “advance,” “salient,” and “reinforcements” are used often. Put simply this is not a book for amateurs; it is for serious students of the Spanish Civil War and students of military history more generally.

Spain in Arms does fill a massive gap insofar as English language military histories of the Spanish Civil War are concerned. So few books on the Spanish Civil War focus on the war itself, and therefore Hooton deserves to be commended. Hooton deserves even more praise for utilizing Spanish archives, which shockingly prove insubstantial when it comes to the numbers and figures of the Nationalist side.

Spain in Arms is a necessary history of this still-important conflict. While not as readable as other histories, Spain in Arms is still a fascinating, on-the-ground look at how this war was fought by the Nationalists and Republicans, and how it was won by Franco.