This Vast Southern Empire: Slaveholders at the Helm of American Foreign Policy 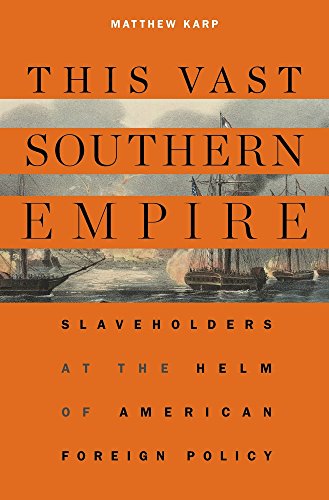 Among historians certainly, it has been axiomatic that control of the authority and power of the Federal government was maintained by the so-called Southern plantation aristocracy for the first 75 to 80 years of the American Republic.

With luminaries such as George Washington, Thomas Jefferson, James Madison, and James Monroe occupying the top spot, Southerners were well placed to retain their hegemony along with the Constitutional guarantees provided therein to protect the continued existence of their “peculiar institution.”

However, in the first half of the 19th century, they had to be and were always on the lookout for threats to their slave labor-based way of life, especially when Great Britain abolished slavery in 1833 in their overseas colonies. Consequently, as a first line of defense, the foreign policy of the United States was specifically geared toward confronting and countering such abolitionist threats in terms of its relations with the other slave holding societies in the Western Hemisphere.

Meanwhile, efforts were sometimes afoot to increase or protect the number of these societies through annexation (Cuba), filibustering—efforts by private American citizens aimed at re-enslaving some free Latin American or Caribbean nations—usually opposed by leading Southern slaveholders for various political and diplomatic reasons and outright attempts to influence foreign governments’ domestic policies.

Consequently, the title of this volume refers not just to a Southern empire within the United States but one which included Brazil, Cuba (via Spain), and the then independent Republic of Texas. Whether it was guaranteeing political and moral support or by a military projection of power, American officials were determined to prevent any inroads against slavery even as Britain’s Royal Navy policed the Atlantic Ocean and African coast in its efforts to stop the slave trade.

The American effort was primarily diplomatic. Presidents Tyler and Polk appointed strong Southern men, such as John C. Calhoun, Henry Wise, and Abel Upshur (prior to his untimely death) as Secretary of State and consuls, to many of the more important posts abroad, where they kept their finger on the pulse of events in their respective countries and reported same to the State Department.

In the event, much of this correspondence was necessarily kept confidential in order to forestall opposition from those who wanted to stop the diffusion of slave labor. This was especially true in the 1840s, particularly in the case of the annexation of Texas, when the Polk Administration attempted, disingenuously, to couch the act in terms other than slavery oriented.

Concurrently, these Southern men also had no qualms about enlarging America’s military to project its power through increased fiscal appropriations even as they maintained a strict constructionist position when it came to opposing so-called internal improvements, such as roads, canals and other infrastructure, financed by revenues from government tariffs.

The author’s thesis does more than just describe America’s foreign policy as geared toward preserving, if not increasing, a bondage based world. It also characterizes an overarching effort to not only oppose emancipationist tendencies everywhere but also advance what was considered to be the progress of civilization worldwide through an enforced labor system in which the superior (white) race dominated the believed inferior races of Africa and Asia.

In effect, empire building was what Southern slaveholders tried to effect in order to compete with the efforts of Great Britain, France, Belgium, and other imperial-focused regimes in dividing the globe as a means of increasing American power and prestige internationally.

The advent of Abraham Lincoln’s election, of course, brought all of this crashing down, with slaveholding elites seeing no way out and no other way of maintaining their hegemony than by secession and disunion, acts which brought about the end of the enforced labor system which they originally fought to prevent. Those same Southern elites now had to rely on their own devices that quite obviously included “King Cotton” and “Emperor Slavery.”

The sources employed in this volume demonstrate a public as well as behind-the-scenes look at how slaveholders thought, acted and, most importantly, manipulated the foreign policy of the United States for their own ends.

Given the author’s considerable research, there is much more here than can be covered by a review. Read his text carefully, and the language of the 19th century documents quoted therein, in order to ensure proper understanding of the points made. For those who have never pondered his thesis, Karp provides much about which to think and consider.