South with the Sun: Roald Amundsen, His Polar Explorations, and the Quest for Discovery 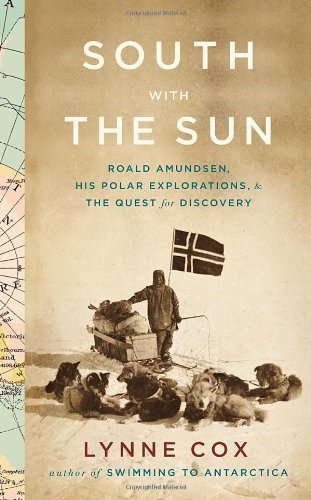 “While the two narratives— Lynne Cox’s and Amundsen’s—could be complementary, in South with the Sun they seem to be somewhat at odds with each other, as the only common ground between them is just that: the common ground of geographic place.”

Roald Amundsen’s achievements as an adventurer really need little introduction. In the early part of the 20th century, Roald Amundsen was the first explorer to successfully navigate the ever-elusive Northwest Passage, the first to reach both the North and South Poles, and the first to lead an Antarctic Expedition, from 1910–1912. Amundsen’s accomplishments firmly established him as a leader in the fervor of Antarctic Exploration, alongside others many others, such as Robert Scott and Ernest Shackleton.

In South with the Sun, Lynne Cox explains to the reader early on in her book the connection that she’s felt to Roald Amundsen, by proxy: Her career as an open-water swimmer has brought her geographically close to places where Amundsen left his historical mark. (The is an easily understandable attachment to a historical figure. In high school, I became an ardent admirer of Ernest Shackleton and reread Endurance countless times, arguably contributing to my interest in ice climbing.)

Ms. Cox traces Amundsen’s story from his childhood in Norway, spinning a tale of a boy who dreamed of the Arctic and of places unseen and unexplored. She spends several chapters outlining Amundsen’s personal hero, Fridtjof Wedel-Jarlsberg Nansen, and Nansen’s contributions to Norwegian nationalism and his epic crossing of Greenland’s interior.

One particularly interesting element that Ms. Cox highlights about Amundsen is his role as a “mentee” and how his years carefully observing others and their successes so positively contributed to his later expeditions. For example, in a particularly tough stint in Antarctica, Amundsen learned about the necessity of fresh meat in diet from the ship’s doctor and naturalist: Dr. Cook. Amundsen later credits Cook with this necessary element of nutrition and diet in such extreme and hostile area.

Interestingly, the narrative structure that Ms. Cox uses to build Amundsen’s story is reminiscent of how one would train for an extreme athletic event. Her descriptions of Amundsen’s life are suggestive that Amundsen’s life was clearly directional—as if going “toward” something or as if each expedition worked to contribute “toward” some end life goal.

In this type of narrative, each expedition is basically additive and not an end accomplishment in and of itself. While this is a easy fallacy of biographic narrative, it is also a bit distracting to the reader to not have a clear sense of what type of biography of Amundsen Ms. Cox wants to tell.

As such, each episode or vignette seems to be parallel to a set of laps or curls: simply training for a larger something. Indeed, part of this could be her commitment to justifying “why” Amundsen succeeded in his polar explorations and when so many others failed. She argues that this is because Amundsen prepared for everything in a systematic and methodical manner–much like an athlete prepares for a big event.

This, however, seems to underscore the preparedness of Amundsen’s contemporaries. These were not fly-by-night traveling salesmen of exploration, setting out willy nilly across the polar ice caps on some great Edwardian era lark. Amundsen’s contemporaries were deeply committed and prepared individuals, dedicated to the perils and possibly afforded to them at the beginning of the 20th century.

Moreover, the reader is unclear whether Amundsen saw his life in such a unilateral and unidirectional manner or whether this is simply the narrative used in South with the Sun. At some point, the reader wants to stop stretching and start running with the narrative.

The personal connection that Ms. Cox strives to establish between herself and Amundsen can, at times, become distracting to the overarching narrative of the book. Amundsen’s story is constantly interrupted with asides about Ms. Cox’s own career as an open-water swimmer (which is indeed impressive), but begs the question of whether these tangents are germane to the overall telling of Amundsen’s story.

It seems, almost, that there are two stories—two narratives, if you will—at play. One is the story of Amundsen, his polar explorations, and his quest for discovery, as suggested by the book’s title.

The other story is Ms. Cox’s own–a story that chronicles her accomplishments as a swimmer and her desire to understanding the historical “greats” in areas she’s exploring. Indeed, close to half of South with the Sun focuses on Ms. Cox’s own swimming accomplishments and exploits. Though athletically admirable, the memoir-element of South with the Sun feels, to the reader, as a bit of bait-and-switch in terms of topics.

South with the Sun recounts some of Roald Amundsen’s truly amazing adventures in his polar expeditions. The reader is easily caught up in the adventure of the age and the accomplishments that came with it. It is easy to see how significant Amundsen’s life and stories were to Ms. Cox, influencing the direction and types of athletic goals she’s set for herself.

While the two narratives—Lynne Cox’s and Amundsen’s—could be complementary, in South with the Sun, they seem to be somewhat at odds with each other, as the only common ground between them is just that: the common ground of geographic place.