Something That May Shock and Discredit You 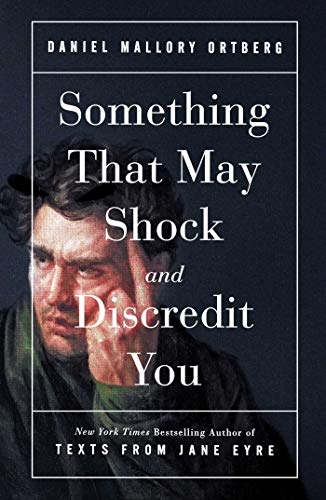 “Read slowly to keep from flailing. Ortberg’s writing will wait for you to catch up.”

Daniel Mallory Ortberg holds an elevated position in gender-savvy online culture. As co-founder of The Toast, the now-defunct, much-mourned feminist website, Ortberg connected crucially important writers (like Ta-Nahesi Coates and Roxane Gay) with a broad audience of gender-hip millennials and like-minded members of other generations. During her 2016 presidential campaign, Hillary Clinton “came out” as a dedicated follower of The Toast, and even briefly wrote for it.

Ortberg’s contributions to the site ranged widely, from texts from Jane Eyre (later the title of his first book) to commentary on fine art. Each piece featured Ortberg’s wry, slightly twee tone, and a deeply rooted cultural awareness that made the tone ironic. Since The Toast’s ending in 2016, Ortberg has taken over as advice columnist for Dear Prudence on slate.com (easily the best advice column on the internet), transitioned, changed his name, married, and published two more books: The Merry Spinster: Tales of Everyday Horror (2018) and now Something That May Shock and Discredit You.

In keeping with the remarkable changes in his life, Shock and Discredit is a fusion of old and new Ortberg work. It’s a collection of chapters and fragments, pieces that refuse single identities. In “Lord Byron Has a Birthday and Takes His Leave,” (itself almost a poem) Byron’s histrionic tone is both absurd and somehow perfectly apt:

How someone who’s spent so much cumulative time

resting their head against my chest

could end up caring so little about the heart beating just underneath it!

It’s kind of funny, if you think about it, and I do,

pretty much all the time!”

Here is Lord Byron, Romantic Poet, in full voice, rendered into (post) modern language and performing on the edge of absurdity. The intensity of emotion and self-centeredness are stripped of their high language, and become vividly queer, utterly recognizable, and essential to the gender mode that Ortberg himself is learning to express throughout this collection.

Much of the book is more autobiographical, but indirectly. The first chapter bears the complex title, “When You Were Younger and You Got Home Early and You Were the First One Home and No One Else Was Out on the Street, Did You Ever Worry That the Rapture Had Happened without You? I Did.” This contradiction, between highly familiar, casual language and very specific, far-from-general experiences, sets the tone, one unique to its author.

Ortberg is perhaps closer than any other writer to functioning as the voice of progressive millennials, but his life has been far from a typical one. He was raised by a deeply religious, conservative, but not evangelical family. He went to a private religious college. He founded a women’s website. He struggled with, acknowledged, and is now working to come to terms with his trans-ness. He has fallen in love with and married a trans woman. He has gone, effectively, from being “Everygirl” to “Not Every Man, but Maybe Some Men? If They Happened to Love Boys Who Loved Video Games? And Read Serious Literature Only Partly to Mock It? And Loved, Wrestled, and Died in the Arms of a Greek God?”

Question marks hover perpetually around his prose. Every movement of Ortberg’s writing as he considers gender is hesitant, and his use of upspeak inflection both satirizes the femininity associated with that questioning tone and engages with it genuinely. There must be a space between being prepared to mock gender norms and being deeply uncertain about them. The sincerity beneath the humor is new in Ortberg’s work, and powerful and well as disconcerting.

The book is emotionally effective, but not always entirely accessible. In many ways, Ortberg’s transition is likely to be less alien to many readers than his deep Biblical knowledge. “Paul and Second Timothy: The Transmasculine Epistles” is clearly deeply personal, reflecting Ortberg’s religious education: “Anyhow, just a few reminders about your transition: be strong. If you hear people say nice things about me, as always, please feel free to pass that information along!! Be prepared to hear a great deal of unsolicited nonsense from all corners. Remember that we live together in the body of Christ first, then in the body of believers, then in the body of the individual; all are necessary. Deny none of them.”

Something That May Shock and Discredit You is Ortberg’s least accessible book, but also his most important. Unlike his earlier work, Shock and Discredit must be read slowly, and with reflection. It’s not always easy. The breezy humor sometimes dives deep into New Testament referentiality without actually gesturing to deep faith. Read slowly to keep from flailing. Ortberg’s writing will wait for you to catch up.