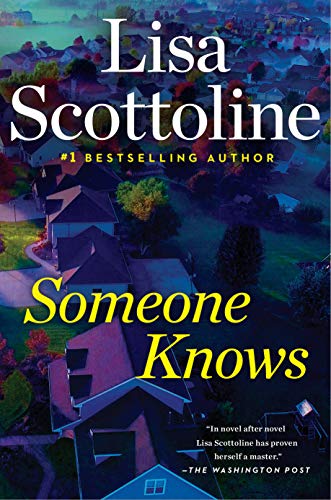 “Scottoline reminds us that the truth will set you free—if it doesn’t kill you first.”

Lisa Scottoline is a singular name in suspense. After a career in corporate law, she made a successful transition to crime novelist, penning 32 novels and earning an Edgar award (for Final Appeal). Her books boast 30 million copies in print domestically and publication in 35 countries across the globe. With her daughter, Francesca Serritella, she also writes a weekly column for The Philadelphia Inquirer; those pieces have been adapted into a series of bestselling nonfiction titles.

The author’s newest, Someone Knows, marks her first book for G.P. Putnam’s Sons and continues her evolution from legal thrillers to domestic suspense.

The story’s prologue opens in the present day, with thirtysomething Allie Garvey returning home to Brandywine Hunt, Pennsylvania, to attend the funeral of a childhood friend. Beyond the requisite grief that comes with such an occasion, there’s also a keen sense of trepidation. After all, Allie and three others—including the deceased—have been harboring a dark, deadly secret for 20 years. Distance has kept it buried, but reunions have a way of dredging up the past.

In the summer of 1999, Allie is reeling from the recent death of her older sister, Jill, to cystic fibrosis and the subsequent rift it’s caused between her parents. Overweight and socially awkward, she’s an outsider who feels defined by tragedy. Circumstances, however, bring her world into orbit with an unexpected group of peers: pretty, popular Sasha; privileged, preppy Julian; sensitive, wannabe writer David; and new-to-town Kyle, who inadvertently upsets their tenuous grouping. It’s the fateful discovery of a gun buried in the woods that unites—and ultimately divides—them.

The boys (particularly David, who she’s crushing on) and booze prove a welcome distraction from Allie’s unorthodox home life, and she begins sneaking out to meet with her new “friends” under the cover of darkness. It’s the allure of the gun, and the sense of recklessness, danger, and unity that comes with it, that compels complicity despite her better judgment.

But one night, a game of “pretend” Russian Roulette goes terribly wrong, leaving one of them dead and the others running scared. Though the authorities rule it a suicide, the threat of the truth being exposed lingers, altering the course of the survivors’ lives.

This is most notable in Allie, the story’s focal point, as readers are allowed an intimate look into her grownup life; though she has a respectable career and a loving husband who wants to start a family, Allie is emotionally distant and, in some cases, self-destructive. Readers know why, though her supposed intimates are allowed only as close as she’ll let them. It’s no way to live, and one of the reasons she wants to disclose the long-hidden truth. The fact that she remains an object of ambivalence to her cohorts in silence, who have not kept tabs on her as she has them, is ironic in that her reemergence will force a reckoning.

The first part of the narrative is told in third person, alternating perspectives that include the aforementioned teens as well a limited number of parental figures. It’s an effective slow burn, and one that allows Scottoline to explore the private lives behind the public faces of her characters, all of whom have personal and/or professional stressors that motivate their actions. Her depictions of adolescent angst are largely on point, which adds an aura of authenticity. The outcome is inevitable, but it’s the gradual buildup—and the dynamic character development—that gives the tragedy emotional resonance.

The second part of the narrative maintains a similar structure but has an entirely different tone. Allie’s return, and her desire to put the past to rest by revealing the truth of what really happened in the woods 20 years ago, places her in the crosshairs of somebody who will kill (and kill again) to keep that particular secret.

Short chapters, bombshell revelations, and an escalating body count signify that Scottoline is now firmly in thriller territory. It’s a somewhat jarring transition, and one that may confound readers who prefer the depth of the author’s earlier exposition to the more action-oriented conclusion; conversely, those who prefer fireworks to sparks will appreciate the urgency.

Someone Knows wants to be a lot of things (and thereby appeal to a lot of readers), and mostly succeeds. It’s the drama of domesticity, though, that really gives this work a sense of realism, providing the frenetic finale its grounding force. Children keep secrets from their parents; parents keep secrets from their children. Regardless of intent, the consequences can be devastating. Ultimately, Scottoline reminds us that the truth will set you free—if it doesn’t kill you first.