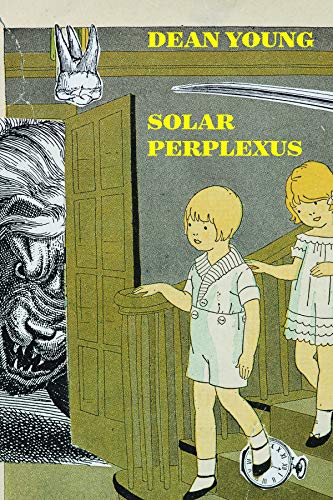 Solar Perplexus is Dean Young’s 17th poetry collection, and like much of his work, this book is intensely, even aggressively absurdist. Much is signalled by the first poem, pointedly titled “Reality”:

I’m sure I’ve tried to avoid it

ever since my teachers and ex-girlfriends

The promise from the outset, then, is an aggressive rejection of the real as disappointingly banal, “one of those beige plastic covers / over the hospital’s main entry.” Take the implied misogyny or leave it where it lies.

Some poems in the collection are elegantly technical in their resistance of convention. In “Infinitives,” Young balances unconjugated verbs with prepositional phrases: “To be stopped at security / for crying. / For something wrapped in foil.” The repetition of “for” in echo of “to” challenges even the conventions of grammar whereby “to” changes its nature depending on its function.

“Goals for Recovery” frames rehabilitation in terms of similes that spiral cheerfully away from poem’s framing conceit. Young’s initial comparison is clear: “at least when I drink / red, it doesn’t drain out. It augments. / Like pennies in soil turn hydrangeas blue.” From there, though, the similes slide out of alcohol into less chemical madnesses, and finally into the absurd details of ordinary life: “Like overtipping the 3-fingered girl who cuts / my hair to help get her boyfriend out of jail.” Soon even that tenuous connection is lost, “Like eye contact / with an ostrich. Like packing the smallest / suitcase, never intending to come back.” It’s a poem that seduces with its resistance to the linear and the orderly, speaking to a near-century of poems that love drinking over sense.

At other points, the poems’ absurdity becomes self-parodic. The breakdown of meaning in poetry creates a territory in which all language is possible, but the silliness invites visions of a stoned coffee-house performer whose resistance to clarity reduces the audience to irritation. When Young writes, we’re left stirring our coffee and hoping that the next performer will signal something, anything to cling to:

“Much better to have a head that floats

and an amaryllis bulb. The fox steps

closer. Its envelope is blue.”

Beyond all of this lies the question of the utility of such poetry. Does poetry need to be useful? Young seems clear in his argument that it doesn’t. One imagines him gesturing to Oscar Wilde’s declaration that “all art is quite useless.” But that’s a declaration that springs from and moves through a narrow and privileged segment of the artistic world. One may admire such art intensely (as it demands), yet still look for poetry with function: to articulate a still-little-known position, to expose the invisible structures of power, to articulate and debate real tensions.

That reader need not look here. Young’s collection is unapologetically absurdist, even when a little apology might be appreciated. His work is charming in small doses, but Solar Perplexus (emphasis on the perplexed-ness) rapidly overwhelms seekers after meaning, and at 80 pages, offers a quest on which only dedicated Dean young fans are likely to embark.