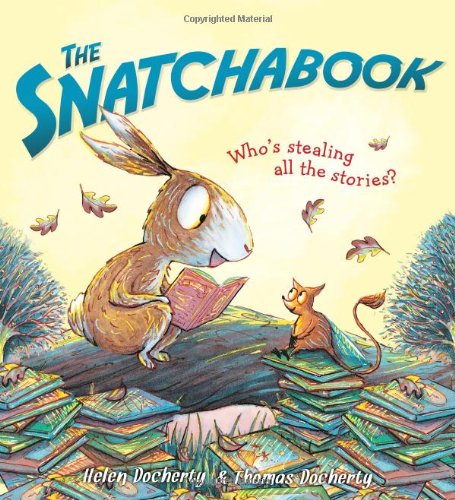 “It’s clear that the creators of The Snatchabook set out to deliver a lighthearted tale, so it’s baffling . . .”

The Snatchabook has a fun title and a promising premise: Someone is stealing the beloved bedtime storybooks from the animals of Burrow Down, youngsters who “in every bed, listened hard to each word said.”

One brave and plucky rabbit, Eliza Brown, is determined to solve the mystery and set things right again.

Thomas Docherty’s illustrations are charming and attractive. The animals are engaging, with large eyes and friendly miens. We get peeks into their warm abodes tucked inside trees and carved under the forest floor. Creative perspectives abound throughout the story.

The book is being marketed heavily as a crowd-pleasing read-aloud, but the rhyming is at best adequate. Mostly, it’s clunky and inefficient, frequently padded with filler words like really, very, just, and quite to supply enough syllables in lines that require them. Some lines are rather feeble: Her curtains opened, just a chink/She barely had a chance to blink/Her storybook just disappeared!/Eliza found that very weird.

One might be forgiven for not achieving Seussian heights with a rhyming picture book (though one must consider that such a comparison is inevitable). But recent titles like Wild About Books by Judy Sierra come to mind, books in which rhymes are crisp, efficient, and frequently funny. By comparison, there seems no reason the text in The Snatchabook actually needed to be written in rhyme.

The psychology of The Snatchabook is something less than adequate. Eliza Brown traps the elusive thief, who turns out to be a sad little flying squirrel-like creature who has evidently been stealing books because he doesn’t have parents and wants someone to read to him.

The rather significant issue of why he doesn’t have parents is not addressed. Neither is it recognized that he is called a Snatchabook, which might indicate that it is in his very nature to, well, snatch books. The poor little guy even suggests as much when he whimpers, “I had no choice” when first apprehended, but this is ignored. Eliza simply orders him to return the books, and everyone lives happily ever after once the shamed snatcher starts visiting different residents of Burrow Down each night to share in their story times.

It’s clear that the creators of The Snatchabook set out to deliver a lighthearted tale, so it’s baffling that they chose to include an issue as serious as parental loss or abandonment in such a throwaway manner. It’s as if they don’t expect the real readers of their book to be as attentive as the fictional readers of Burrow Down. To be sure not every child in every bed listens hard to each word said—but many do.