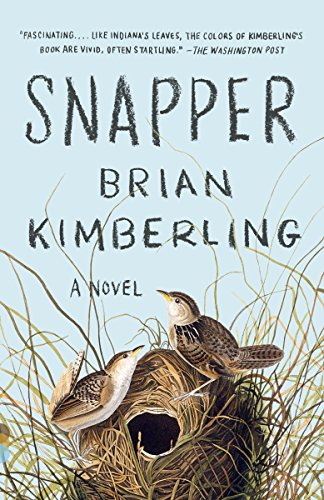 “If you enjoy a lightly told tale, it’s well worth spending a few hours of your time in the company of Brian Kimberling . . .”

It should be high on publishers’ what-not-to-do lists, if there are such things. If there aren’t, perhaps there should be because as tempting as it must be to oversell a product, hyperbole does books like Brian Kimberling’s excellent debut an enormous disservice.

Instead of wasting time wondering what happened to the promised hilarity, readers would be better served enjoying the author’s ease with words, his talent for spinning out a plot, and his ability to create credible characters.

Gently amusing in parts and filled with entertaining absurdities, Snapper by Brian Kimberling
is not hilarious—and it’s all the better for it.

If anything, central character Nathan Lochmueller sometimes comes across as a bit of a bore. That’s okay, too. This approach to characterization fits perfectly the perceived notion of one who studies birds and their habits and habitats for a living. It’s almost a given he’d never find a job in stand-up.

Nathan falls into his job by accident—his predecessor’s vehicle was flattened by a sycamore tree during a thunderstorm. It had been his own fault, implies Nathan’s ornithologist boss, Gerald. “He shouldn’t have been in the car. We work in all weather.”

The only exciting thing about Nathan—apart from his glitter-festooned truck, the Gypsy Moth—isn’t even really his. It’s the object of his love, the beautiful, free-spirited Lola, who’s not only openly liberal with her favors, she’s a liberal academic, too. Beauty, brains, and versatility . . . What’s not to love?

At one point, Nathan carves her name into dozens of trees throughout Indiana, the blade used–an antique Bowie knife with a buffalo-bone handle, a gift from the lovely but loose Lola.

This seemingly wanton act is not, after all, desecration but salvation: “My objective in defacing these trees was to eliminate certain small spray-painted dots used by the U.S. Forestry Service to indicate that a tree was scheduled to be felled. I turned those dots into the ‘o’ in Lola and worked out from there. Then—in case they simply logged every tree marked ‘Lola’—I engraved surrounding trees, too.”

Dedicated bird nerds—reportedly a huge market—may be disappointed there isn’t more detail on their favorite subject (although this one was fascinated to learn that flycatchers, the clever things, adorn their nests with dangling cobwebs). For the general reader, though, the balance is probably just about right. What is included is doubtless immaculately accurate. Indiana-born Mr. Kimberling spent two years as a research assistant working on a major study of Indiana songbirds, so he should know his stuff.

If you enjoy a lightly told tale, it’s well worth spending a few hours of your time in the company of Brian Kimberling’s entertaining words. Just don’t expect any belly clutching moments from this “hilarious new voice in fiction.”