Smoke and Iron (The Great Library) 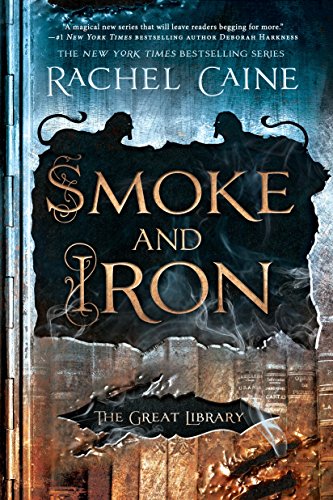 “No one with a book is ever alone, even in the darkest hours.”

The time has come. The chessboard has been set, and battle lines have been drawn.

Smoke and Iron is the fourth installment of Rachel Caine’s, thrilling The Great Library series, set in a frightening, political, alternate world in which owning books are strictly forbidden, and what is distributed is censored through alchemy. Fans of the young adult/dystopian genre will not want to skip over this series.

From the first page, the reader is pulled into the Archivist’s game of cat and mouse, as Caine introduces us to one of her main characters, answering the big question: Who is the main character and what is their problem?

It has been five days after Jess Brightwell’s plan has gone astray. He’s pretending to be his twin brother, Brendan, but managed to be tossed into the Alexandria prison along the way. Through acts of betrayal, he has been accompanied to this prison with his mentor, Scholar Christopher Wolfe, and an Obscurist, Morgan Hault, whom he is not sure whether he just fancies her or actually loves her. But Jess has a plan, a plan that may cost him and all of his friends their lives, and a guaranteed first-row seat to The Feast of Great Burning.

His other friends—Khalila, Glain, Thomas, Dario, and Niccolo, all whom believe he has betrayed them—are caught in their own troublesome adventure, aboard a ship headed to Alexandria. Some of his friends have already been marked for dead by the Archivist, while others have been marked as valuable. The King of Spain even has taken interest in them, too.

Jess will stop at nothing to save his friends, but the ultimate question is, Will they all come out unscathed? His psyche also has another goal in mind—taking down the Archivist Magister, who wants nothing more than to see him dead, while saving The Great Library, and see that it is restored back to how it once was, abolishing the corruption that has taken root in it over the centuries.

This task will not come easy. New alliances containing smugglers, thieves and scholars will need be made. Friends will be betrayed, and terrifying weapons, such as an automaton dragon, and Ray of Archimedes, will be built before the world could go up in flames.

The novel is broken up into fourteen parts, each which are told from a different character’s perspective. These characters include: Jess, Khalia, Glain, Santi, Thomas, Wolfe, and Morgan. As the story develops, these characters discover the inner strength and qualities necessary to survive. This benefits the reader by allowing him or her to become further pulled into the story, while helping flesh out these characters, though sometimes their individual character voice can be lost along the way. This specially becomes troublesome when Jess has his identity temporarily erased, so that he actually believes he is Brendan. Without fully realizing what’s really going on, the reader may become confused.

“We have work to do. Whatever happens tomorrow, we’re a wounded beast in a world full of wolves.”

Rachel Caine manages to take you on a four hundred plus page emotional roller coaster full of intrigue, suspense, anxiety, shock, and relief before delivering the final blow. Caine’s craftmanship is nothing short of brilliant. Just when the reader believes they understand where the story is going, there’s a twist and turn waiting around the corner.

The story ends on a cliff-hanger, however, this time around it is an epic ending cliff-hanger that leaves the reader with their jaws on the floor, desperately wanting more.

Oh, what are we to do while we wait for next year when the final installment of this fantastic series comes to print?

Mackenzie Flohr is the author of The Rite of Wands series, a gold medal winner in the 2018 Literary Classics Book Awards for Fantasy.