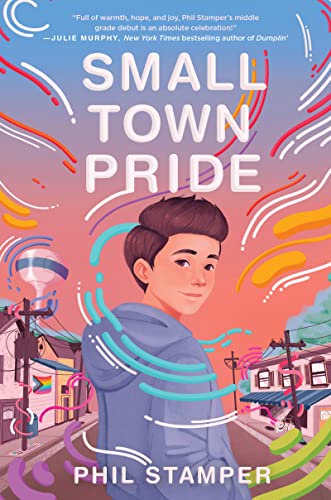 “this is a lovely, five-star-worthy novel for young readers that is well written and deserves full applause.”

Small Town Pride is an engrossing story from start to finish. Phil Stamper has done a superb job of bringing it to life. His writing is thoughtful and the characterization of the main protagonists—Jake, Jenna and Brett—is believable. The narrative has a beautiful flow that invites the reader in and holds their attention, thanks to the well-crafted and perfectly timed plot. This is easily one of the best LGBTQ+ novels for young readers in recent years, and its excellence deserves full recognition. This novel has the power to change lives and give young people courage and hope when bigotry and homophobia appear to have the upper hand.

Homophobia is a strange phenomenon, full of fear, hatred, intolerance, and sometimes envy from those who are battling internalized angst about their sexuality and wishing they could come out of the closet. It is everywhere, even on the doorsteps of the very same homophobes who fail to recognise they are often discriminating against their own sons, daughters, brothers, sisters, parents, cousins, and so on. The truth is, every family in every country of the world irrespective of race, culture, class, or religion will contain members of the LGBTQ+ community and every generation of people will have queer family members in their lineage.

Jake, a middle-grade student, lives in Ohio in a small town called Barton Springs. The story starts with him coming out to his parents. His parents are very accepting of this and as a gesture of support, his father erects a large Rainbow Pride flag in the front garden for the neighbors and town to see.

Many are impressed and supportive but equally, it draws negative attention and discriminatory comments on social media. The formidable town mayor who lives on the same street as Jake also has reservations. Her handsome son Brett is in the same class as Jake and is secretly bisexual. Brett becomes Jake’s ally and, along with Jake’s best friend Jenna, they start plotting how Barton Springs can hold its first-ever Pride parade, which will help showcase the town as a welcoming place for everyone and not just straight people.

The mayor’s position is coming up for re-election, and she wants to appease as many voters as possible even if it means opposing the Pride parade proposed at a council meeting by Jake and his parents. But will she be powerful enough to quash their plans and determination? Here is an ambitious woman willing to do whatever is necessary to remain in office even if that means siding with those against the parade because they cannot tolerate differences in others. Perhaps life is yet to teach her that tolerance and acceptance have many followers, too, and those with these attributes are skilled at overcoming obstacles put in place by those who hate. But ambition and ego sometimes cause brain fog because right under her nose, the mayor fails to see that her son and Jake are becoming very close and could possibly end up in a relationship.

Once again, this is a lovely, five-star-worthy novel for young readers that is well written and deserves full applause.