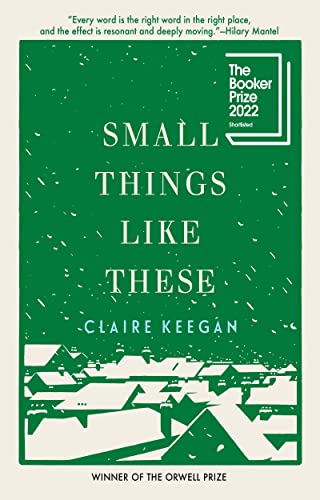 “Small Things Like These is a succinct, heart and soul story of a man coming to terms with a consciousness born of his personal narrative. In precise, unadorned language, it personalizes a once taboo subject recently come to the fore, and now considered a blight on Irish history.”

In 114 pages, author Claire Keegan delivers an odyssey of the soul in her gem of a novel, Small Things Like These, without leaving the setting of New Ross, beside the River Barrow.

It is 1985 Ireland, and coal and timber merchant Bill Furlong knows times are hard with Christmas coming. The married father of five girls, Furlong is a self-made man who comes from nothing, his deceased mother having lived with shame as an unwed mother who reared her child by being a domestic servant of the wealthy, Protestant Mrs. Wilson.

Furlong’s days feel mechanical for all their routine. “Lately, he had begun to wonder what mattered, apart from Eileen and the girls. He was touching forty but didn’t feel himself to be getting anywhere or making any headway and could not but sometimes wonder what the days were for.”

Just days before Christmas, Furlong keeps his employees at the yard while he makes deliveries to customers long loyal to his business. When a large order from the Good Shepherds Convent arrives, Furlong takes personal responsibility for delivery, but shudders with the recollection of the troubling time he’d last had on the grounds, when he was approached by a waif of a girl asking him to help her escape. The memory haunts Furlong, who recalls his wife’s response when he’d voiced his concerns over the place purported to be a training school for girls that also ran a laundry business.

Furlong knows well of the harsh rumors attached to the convent as a place for wayward girls, and author Claire Keegan, capturing the very bone marrow of Irish sensibility, writes of Eileen’s response to her husband’s worry: “She sat up rigid and said such things had nothing to do with them, and that there was nothing they could do, and didn’t those girls up there need a fire to warm themselves, like everyone?” The pragmatic Eileen continues, “If you want to get on with life, there’s things you have to ignore, so you can keep on.”

Furlong has conflicted feelings about his own childhood. Raised in his mother’s employers’ home, he knows had it not been for the sufferance of Mrs. Wilson, his life would be disadvantageously different. Feeling hit close to home, Furlong responds to his wife’s comments, “Isn’t it a good job Mrs. Wilson didn’t share your ideas? Where would my mother have gone? Where would I be now?”

Furlong’s Christmas delivery trip to the convent is fateful. While opening the latched storage shed to unload his coal, he discovers a young girl trapped within, and, when he takes issue with the nuns on the girl’s behalf, he suspects all is not as it seems. Being told one thing by Sister Carmel at the convent, his heart intuits a darker truth that rings in a similar tone to the plight of his mother, and in time, Furlong is inspired to act. “He found himself asking was there any point in being alive without helping one another?” Furlong wonders, “Was it possible that the best bit of him was shining forth, and surfacing?”

Spontaneously spurred to action to help the young girl, Furlong knows, “The worst was yet to come.” “But the worst that could have happened was also already behind him; the thing not done, which could have been—which he would have had to live with for the rest of his life.”

Small Things Like These is a succinct, heart and soul story of a man coming to terms with a consciousness born of his personal narrative. In precise, unadorned language, it personalizes a once taboo subject recently come to the fore, and now considered a blight on Irish history.

All praise to author, Claire Keegan, for masterfully adding to her arsenal of widely acclaimed, human interest stories. Small Things Like These is a fathoms-deep, poignant novel that will appeal to fiction readers enamored of the sub-genre categories small town and rural fiction; holiday fiction; and family life.