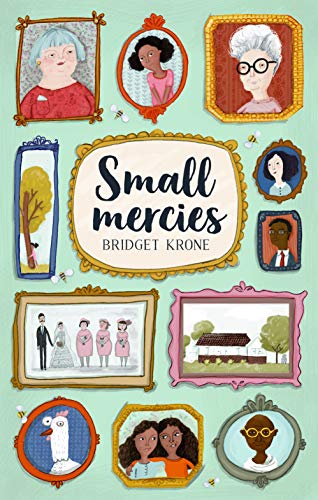 “Small Mercies isn’t intended to educate readers on details about South Africa as much as it’s intended for the reader to experience the multifaceted reality of South Africa.”

Mercy steals the reader’s heart from the very first page. Although more accurately, it’s Mercy’s eccentric foster aunts who do the initial stealing. Their quirky excuse notes—one says Mercy has “the collywobbles,” another that she has “a dicky tummy,” and on another that she can’t participate in inter-house cross-country because she “has a bone in her leg”—let the reader know some sweet humor is ahead.

Mercy needs that kind of protection. Orphaned at a young age under dark and confusing circumstances and now living with aunts so poor they can only afford one light bulb, the young girl carries with her a suitcase of fears and insecurities. All she does seem to have is the fierce love and protection of these two elderly relatives who will do anything for her.

Unfortunately, Aunt Flora is slipping into dementia, which is just one more thing for Mercy to worry about and feel insecure over. If the social worker from Child Welfare discovers just how poor the three are, they could take Mercy away. Added to all this is that the house seems to be falling apart around them just as a greedy housing developer starts putting pressure on the sisters to sell their property.

The story unwinds slowly and at first seems to be not much of a story. Mercy doesn’t want to dance a traditional dance, bring ethnic food to school, or be visible in any way in school. Even a simple assignment to write a report about someone she admires makes her anxious. She feels awkward around her classmates and doesn’t seem to have any friends. Even worse, a mean classmate frames Mercy for stealing money. Unfortunately, Mercy’s teacher isn’t a good fit for teaching, nor is she good at protecting her students. All of it makes Mercy a sad little character.

In spite of this, the story does unwind and takes the reader on an important journey in which Mercy finds courage. Along the way, readers are rewarded with bite-sized South African culture and history lessons beginning even before the first page. Krone prepares the reader with an explanation of the word “coloured,” and notes that in contrast to its use in America, “in South Africa its use is widespread and more acceptable, if sometimes controversial.” Mercy herself is coloured and her aunts are white, which adds to the complexity of the story in subtle ways.

Throughout the book, Krone casually includes references to various groups that are part of South Africa. No doubt for the typical South African reader, these references make perfect sense. Unfortunately, readers in North America, particularly the target reading age, will be clueless. Zulu? Xhosa? Voortrekker? For readers outside of South Africa, it would be nice to have even a paragraph or two about the different groups at the end of the book. In the end, though, it doesn’t matter. Small Mercies isn’t intended to educate readers on details about South Africa as much as it’s intended for the reader to experience the multifaceted reality of South Africa.

In fact, one of the benefits for the North American audience is that the reader realizes that, yes, there are unfamiliar differences between the two places, but even more important, the similarities are even greater. Take away the African cultures and replace them with familiar American cultures, and the classroom is the same. Children can be kind and can be cruel; they can stress out about school expectations; and the worries they have about their home life travel with them into the classroom.

Both South Africa and the United States have a history of cultural tensions and discrimination—another similarity. Krone could have taken this in many directions, but she chooses to focus on Mahatma Gandhi’s powerful response to discrimination as he traveled through South Africa, and how he lived the Sanskrit word satyagraha. Mercy learns that it doesn’t mean passive resistance, “but it’s actually two words joined together: satya, which means truth and agraha, which means polite insistence. So really it means the polite insistence of truth.” It’s just what Mercy needs to hear to find her own courage to stand up for herself. It’s also a weighty concept for young readers to be exposed to. If only there would be more satyagraha in the world today.

Karen Vermeulen’s simple line drawings complement Krone’s text with appropriate whimsy. The short chapters are a nice treat for the reading level, particularly since the themes have a depth to them that take some reflecting. Krone notes that her “favorite stories are those that, just when you expect a lesson, sing a song instead.” Small Mercies is just that surprising song, full of light and sweetness. Readers will carry the melody in their hearts long after the last page is turned.