The Other Slavery: The Uncovered Story of Indian Enslavement in America 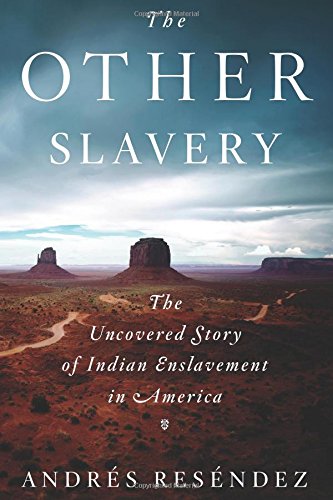 The tale and toll of man’s inhumanity to man is a long, complex, and tragic one, especially when it comes to bondage, slavery, involuntary servitude—call it what you like. In the case of the Western Hemisphere, the best known is obviously that of Africans and is what immediately comes to mind at the mere mention of the term.

However, less well known or familiar are the institution and systems established in the New World by the Spanish, initially, right on down to Americans in the West, largely during the course of Manifest Destiny in the 19th century, lasting approximately four hundred years. Coverage of this topic is now beginning to get its due.

In recent years, there has been an increase in publications by authors such as Margaret Ellen Newell, Christina Snyder and Barbara Krauthamer whose works have documented the long time and ongoing nature of Indian bondage. Indeed, their works are among those cited by author Andres Resendez in the book under review and who apparently employs the term Indian as opposed to Native American used in the United States.

Resendez has followed the trail of this exploitation virtually from day one of European contact with the indigenous people of the Americas. Not only did Columbus bring back some Indians to prove he had reached his destination in the Indies; shrewd, calculating businessman that he was, he also saw the possibilities of their sale as maximizing the return on his investment along with that of King Ferdinand and Queen Isabella.

Subsequent attempts by these monarchs to outlaw Indian slavery in their Empire were doomed by length of time in communication, distance, and self-interested efforts at interpreting, as slaveholders saw fit, protests and outright evasion of the laws by those in authority.

As well, selling those enemies captured by Indian tribes as slaves was also a tradition, one to which the newly arrived Europeans were more than happy to acquiesce in order to convert Indians to Christianity and to fill the demand for labor in agriculture, trades, and especially mining gold and silver.

The institution in Mexico and the rest of the Spanish Empire evolved over the centuries as outright buying and selling of humans to be replaced by the purchase of forced, long term labor by way of conviction for (mostly trifling) crimes and debt peonage where any debt of the father would continue to hold his descendants in thrall.

Even with Mexico’s independence and emancipation of all slaves and disenfranchised, there was the usual resistance and lip service paid to the law. The drain on the Indian population continued apace, made even more drastic over the years by the deaths of many to diseases, introduced by Europeans, to which they had no resistance or immunity.

With the arrival of more and more Anglo-Americans in Texas and the far Southwest, a new front of sorts was opened and the usual methods of servitude were maintained, especially following the Mexican-American War. In California, in particular, enslavement was seen as a way of accumulating wealth and attaining a life of leisure as well as reducing the numbers of those who were seen as little more than vermin standing in the way of progress.

In spite of the Emancipation Proclamation and resulting postwar amendments to the Constitution ending slavery and providing civil rights, Indians were left out of any protections and not even considered U.S. citizens by act of Congress until the 1920s. Another blot, it would seem, on the promise of the American Dream and the concept of all humans being created equal.

In addition to the story told by the author, the text is very ably complemented by a list of 17 maps that detail the many relevant areas and locations in Mexico and the American Southwest where much of this tragedy occurred. The list of period photographs and illustrations from primary sources is even more lengthy, providing additional context.

Although there is no bibliography, one notes the reliance on somewhat more contemporary secondary sources in the notes by the author; this is not meant to serve as criticism as research was conducted in the original Spanish and Mexican documents as well.

At a time when we are struggling to come to grips with the legacy of our long-time African slavery experience, it is only right that we should also acknowledge and inform ourselves of the human tragedy endured by the indigenous people of this hemisphere from Columbus’ first contact to the present.