Is That a Skunk? 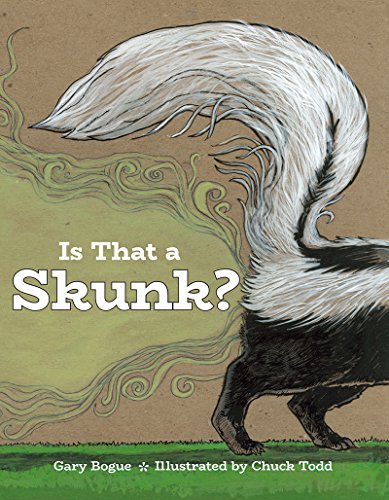 Gary Bogue was a household name in the Bay Area for many years with his daily column about wildlife in the Contra Costa Times. So it is only appropriate that his fourth picture book be about a skunk, a resident of that very Bay Area county (Contra Costa). The story opens with the family having breakfast next to a big picture window when a creature goes by.

The mother advises her son to keep the dog away from the creature, especially after it moves into the doghouse. Father and son run into the skunk one day in the front yard. Lucas goes online to do some research. He asks Google where skunks live and what they eat.

One day the dog confronts the skunk. He gets sprayed because he doesn’t know the four warning signs. Mom mixes up a special cleaning formula to make the smell come off the dog (recipe shown as a sidebar). Lucas discovers skunk babies in the doghouse. A month later the skunks move on, and the dog gets his doghouse back.

The last six pages look like ruled notebook paper and show Lucas’ skunk report for school. The report talks about natural predators, the four types of skunks, how to keep them from wanting to hang out in your yard, signs of a skunk, and skunk books and websites.

Is That a Skunk? would be a handy book to have for an animal report. Although it is written as a story, it is classified as a nonfiction book. The book would work for first through third graders to read alone and could be read to younger children, as well.

The overall sentiment of the story is to try to co-exist with your wild neighbors, especially if they need a place to have their babies.

The family portrayed in the art is an Asian family of four, based on a real family, as stated in the illustrator’s dedication. The art is sufficient. Better than the art of nonfiction books long ago. Todd uses insets to show various facts on one page. These “fact” illustrations alternate with double page spreads that move the story along. The best spread is when Hotdog the Dachshund gets sprayed by the skunk, and Todd draws him ten times trying to get the smell off of himself. The family is shown in the background behind the glass sliding door plugging their noses.

This is a hybrid book between straight facts and a story. The family experiencing the stuff helps make it more interesting. Every grade school classroom could benefit from having a copy of Is That a Skunk? on its bookshelf.