The Siren (The Original Sinners) 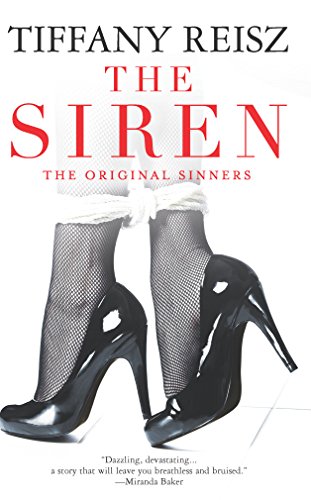 “Tiffany Reisz understands that love hurts, and for some, pain can set them free.”

The first of four novels in the The Original Sinners series, The Siren by Tiffany Reisz is a fast-paced, engaging read.

Opening the kimono on a lifestyle known but not necessarily understood by mainstream romance readers, Ms. Reisz weaves a haunting story of love and pain. Her challenging characters remain long after the book is finished, and she writes with a sense of humanity and humor that softens some of the story’s tougher blows.

But money talks, and Zach’s boss won’t take no for an answer unless Zach meets the author and reads her manuscript.

Certain he can intimidate Nora into retreat, Zach agrees to take a look at the manuscript. The way the author writes his reaction to Nora’s first few sentences displays her storytelling brilliance:

If Ms. Reisz’ technical mastery isn’t enough to grab your attention, the handsome young housemate who opens Nora’s door when Zach arrives to meet her will do the trick.

Nora’s colorful reputation in the publishing industry includes a purportedly underage personal assistant, which Zach immediately learns is only slightly inaccurate. Sufficiently intrigued by the lovely, uncomfortably seductive Nora, Zach agrees to test her mettle for his exacting standard of writing.

Struggling with heartache and hope, longing and love, Ms. Reisz’ vivid characters will dig under your skin and tug at your preconceptions.

Nora’s ex lover Søren is a Dominant to whom Nora was willingly collared as his submissive for five years. He’s also her priest.

But rather than adopt his vocation for simple shock value, Ms. Reisz (a Catholic herself) uses it to drive home her point that love and sacrifice don’t guarantee happiness.

The other characters include Wesley, the virginal college student from Kentucky who lives with Nora; and Michael, a damaged young member of Nora’s church who takes on the title role in the newly released second book of the series, The Angel [also reviewwed at NYJB].

We all know love is as necessary to life as air, but there are different paths to take in terms of how and whom we love. Encouraging us to widen our acceptance or at least acknowledge there are different ways to love, the author demonstrates that love can tie us up and knock us around—and yet we often beg for more.

Tiffany Reisz understands that love hurts, and for some, pain can set them free.