Sins of the Fathers: A J.P. Beaumont Novel 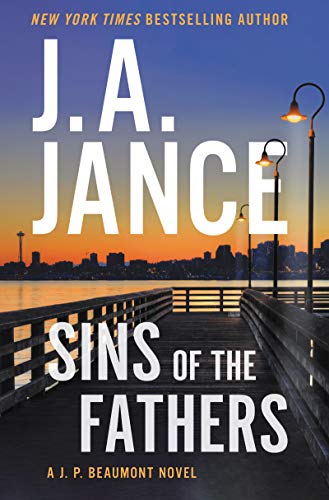 When “the brass upstairs decided to promote a brown-nosing pile of crap and my least favorite partner ever, a fellow by the name of Paul Kramer, to be my boss . . . I pulled the plug and walked.”

From the Seattle Homicide Squad, J. P. Beaumont moves to the state Special Homicide Investigation Team, until that unit closed down. Aging and adrift from the police work he loves, Beaumont takes his wife Mel Soames’s advice and becomes a private investigator.

“. . . someday there would be people out there in the world who’d desperately need my help and that I’d be better able to help them with a license than without.”

A few background checks, a few cold cases worked for an outfit called Last Chance, but “nothing about any of those had really grabbed me.”

Other than the acquisition of a black Irish Wolfhound named Lucy, at the conclusion of one of his cases, not much about his PI work really satisfies Beaumont. Certainly there hasn’t been anybody desperate for his help.

Nobody desperate until an acquaintance from his hard-drinking past appears at Beaumont’s door. Alan Dale arrives with a six-week-old infant named Athena.

“I’m afraid I need your help. I’m looking for a private eye, and somebody at Seattle PD told me that’s what you’re doing these days.”

Beaumont invites him and infant Athena inside where Lucy shows an immediate guard dog interest in the baby, lying by her carrier in protective mode.

Beaumont is apprehensive. He had briefly met Alan Dale and his wife, Jasmine, during a homicide investigation. He and Jasmine had a drunken one night stand, which he hopes Dale doesn’t know about.

The man has enough on his hands without knowing his newly hired PI had slept with his wife before she was his wife. “. . . if Jasmine had never told him about it, I sure as hell wasn’t to be the one to fess up.”

Beaumont sees the no strings attached, one-night stand more than 30 years ago. There was a lot of that going on—one-night stands—in the eighties, two decades after the sexual revolution, and his and Jasmine’s encounter was just one more. Or so he tells himself.

“There was one thing about Alan Dale’s proposed case that I didn’t see coming, and it’s this: No matter how fast you run, you can’t outrun your past.”

Dale needs Beaumont to find his daughter, Naomi, mother of Athena, whom he hasn’t seen or heard from for years. Naomi didn’t even come home when her mother, Jasmine, is dying from hep C. Nor does Naomi bother to come home for her mother’s funeral.

Until the Seattle hospital calls informing Dale that Naomi has given birth to a premature, methadone addicted baby girl and then abandoned the infant, that Dale even knows his daughter is—or—was in Seattle.

Dale comes to Seattle to obtain temporary guardianship, and stays at the hospital with Athena while the infant goes through withdrawal from the methadone addiction passed to her from Naomi. He is unable to get permanent guardianship of Athena until Naomi signs away her parental rights. Athena’s father—if he can be identified and found—must also sign.

Not until Dale shows Beaumont a picture of Naomi as a high school student, does the PI commit himself without reservation or hesitation to find the missing, homeless, and possibly ill with hep C inherited from her mother, woman with whom he feels an unexpected connection. The past has finally caught up with J. P. Beaumont with a vengeance.

“The dark-haired teenage girl in the picture looked decidedly unhappy, but there was something disturbingly familiar about her, and it took a moment for me to figure it out. She looked just like Kelly—just like my daughter, who also looks a bit like me.”

Beaumont moves Dale and Athena into his downtown condo after consultation with his wife Mel. He also shares his suspicion that Naomi is his daughter, the result of that long ago one-night stand, thus making Athena his granddaughter.

Mel, now chief of police in nearby Bellingham, Washington, understands Beaumont’s determination, and approves of his search for Naomi. As Beaumont says, “sometimes when life hands you the unexpected, you just have to run with it.”

And run with it is what Beaumont does. Accompanied by Lucy as his backup, his search leads him to a derelict neighborhood in Seattle, a gossiping neighbor who tells him of a young couple who lived there, and the eviction of an obliviously pregnant woman after her boyfriend deserts her.

Beaumont also learns of the boy’s grandmother, suffering from some form of dementia, who dies in an assisted living home after signing over the four properties she owns in the neighborhood to her daughter, who subsequently sells to a development company for under market value.

If what Beaumont suspects is true, then there is some fraud going on. How can a woman with dementia be aware of signing anything? Also, if the woman’s grandson is Athena’s father, then Athena’s inheritance is being stolen from her.

That is not a situation Beaumont intends to allow to continue.

J. A. Jance is one of the best at combining mystery and family dynamics. J. P. Beaumont, who has aged well if not gracefully in the course of 26 books and two novellas, is a character occasionally afflicted with angst, depression, and guilt, but not so much that he becomes tiresome. Rather, he becomes human, with all the temptations, missteps, failures, and ultimately successes, large and small, that most share.

Although the plot of discovering a child one doesn’t know about, and the subsequent complications and questions that such a discovery entail, is not an original one, Jance handles it in a masterful way. More importantly, she handles the plot in a believable way. The sexual revolution certainly lent itself to babies with unknown fathers.

J. P. Beaumont’s situation may not be as much out of a Victorian melodrama, as out of an irresponsible age of unprotected sex that left many, like Jasmine, with hep C or STDs, and other unfortunates with HIV. Ms. Jance points out without preaching that the Age of Love, with its attendant drug use, casual sex, and cultural rebellion came with a heavy price tag for many.