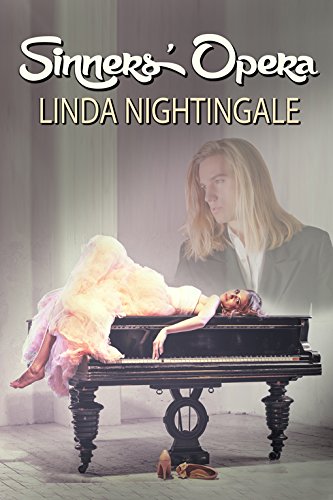 Morgan D’Arcy is a man on the run: from the Charleston police for murders of which he’s innocent and from his fellow vampires for crimes of which he’s guilty.

Told in one extended flashback, Sinners’ Opera is the story of that crime.

Morgan has waited a lifetime for Isabeau Gervase—more than a lifetime since he’s a vampire and she a mortal. He knew her parents, maneuvered them into marriage, and eagerly awaited the birth of their daughter who will be the one to save vampires from their curse.

“He’d manipulated her entire life, interfered in her parent’s lives. It was beyond belief, but sadly not beyond his ability.”

To the child Isabeau, he appeared as an angel, calling himself Gabriel, regaling her with stories of his ancient past. He encouraged her to become what she will later choose as her profession as a geneticist, one seeking to prevent defects before birth.

Contrary to popular belief, vampires and humans can mate, can produce offspring but it’s forbidden by the Les Elus, “the hierarchy of ancients who rule the Vampyre,” because it invariably brings uncontrollable madness.

“DarkeChildren, offspring of immortal and mortal, were genetically flawed.
Puberty was the catalyst that caused the bad seed to flower into madness. The Vampyre swat squad, the Cheval de Bataille, was charged with destroying these poor creatures.”

Morgan’s plan is to produce a child with Isabeau and have her cure it of this madness, thus freeing his own species.

“Our child would never suffer insanity. Isabeau could isolate and eliminate the fatal gene . . . Most sane vampires refrained from pissing off Les Elus—except me of course.”

At this stage of his existence, Morgan is a world renowned concert pianist come to Charleston as part of a current tour. When Isabeau meets him at a charity concert, she has no idea it’s been brought about by his machinations. She’s now an adult, and he’s preparing to claim her as his own. The fact that she has a fiancé is trivial.

“John was Charleston born-and-bred, Old South blueblood . . .” In his own way, he’s as arrogant as Morgan, though nowhere near as deadly. “Her pragmatic boyfriend—fiancé—invested in ventures that made money . . . In most of that equation, she and John were like quotients . . .”

Morgan and John begin their rivalry dueling with words.

“With a perfectly straight face, I said, “Size does count. The length of the strings produces deeper resonance.”

“Some men drive big trucks.” Payne slid an arm around Isabeau’s shoulders,
tucking her close to his side. “Some, I guess, play big pianos.”

Thus Morgan begins his courtship of the woman he’s loved since before her birth. Isabeau responds, but soon their affair whirls out of control.

“Since 1659, I’d never allowed any woman or man to control my fate. For better or worse, I’d shaped the centuries with my own hands.”

That’s about to end.

Vampires’ plans, like those of mice and men, often go astray. An unknown enemy has informed Les Elus of Isabeau’s research, and they’ve sent Lucian St. Albans, their enforcer, to ferret out and destroy any and all involved.

“As a young mortal man, Lucien had watched his countrymen nail a carpenter to a cross. Centuries later, he had the power to condemn me to crucifixion—in the sun.”

Lucian is a particularly beautiful thorn in Morgan’s side since he’s been both savior and threat from their initial association.

I studied the beautiful, ruthless vampire who’d found me wandering a rutted road in the spring of 1659. Without him, the morning sun would have ended my pilgrimage to the Vampyre.”

This time, however, Lucian refuses to look away, intending to bring his favorite to justice if he’s indeed the one behind the present problem.

“Your Mensa IQ makes you more powerful than others your age, but your powers are naught to mine,” he said. “One day you’ll crawl on bended knee to beg my forgiveness.”

I cocked an eyebrow, diverting energy to my shields. “Eternity is a very long
time.”

Unfortunately for Morgan, around the time he arrived in Charleston, someone began committing a series of horrendous murders, and his own actions as well as some deft maneuvering by his foes make suspicion and eventual certainty point to him as the killer. Soon he may be facing arrest.

. . . and there’s still Isabeau’s fiancé to deal with.

Told from Morgan’s point of view, Ms. Nightingale’s version of the “vampyre effect” is original in its use of a transforming virus. Her vampires have reflections, can speak the name of God, and refute several of the usual laws constraining the Undead.

The creation of Morgan himself is a tour de force of egotism, wit, sensuality, and talent, as well as a determination to bring about his plan while protecting Isabeau from harm.

Sinners’ Opera is a beautifully written love story with vivid imagery, dry humor, sarcastic wit, and sensuous love scenes. The descriptions of Charleston bring that city to life. It’s also a fascinating journey through the psyche of a man who’s lived through the centuries but is now willing to die for the woman he loves and to bring his kind into the light of the mortal’s world.

And thereby hangs this tale of love, deception, murder, and revenge.