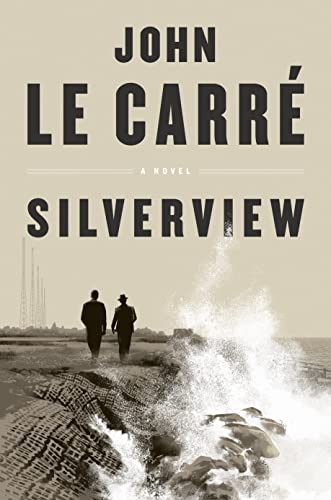 “Silverview is a gift to scholars, aficionados of the genre, and readers at large eager for one last look at the creative mind of an acknowledged master.”

In his touching Afterword to Silverview, John Le Carré’s 26th and final novel, the author’s son, Nick Cornwell, shares with his readers a promise he made to his father sometime before Le Carré’s death: “if he died with a story incomplete on his desk, would I finish it? I said yes.”

The posthumous publication of Silverview marks the fulfillment of that promise. Another novel focusing on the British secret service, the politicization of intelligence work, and the toll taken on the lives of those caught up in its machinations, Silverview presents the story of a domestic security breach occurring in a small English seaside town.

Julian Lawndsley has left an unsatisfying life in London to run a bookstore in an innocuous community “perched on the outer shores of East Anglia.” The fact that he knows nothing at all about books, or the town, or anyone who lives there hasn’t deterred him in the slightest.

When a garrulous local by the name of Edward Avon begins frequenting his shop, Julian’s pleased with the prospect of making a friend, however eccentric and mysterious Edward might be.

A suggestion to convert his empty basement into the headquarters of “The Republic of Literature” in order to spread a greater appreciation of the classics sparks Julian’s interest, and he gladly sets up Edward with a computer and Internet connection to begin ordering books.

Similarly, an errand to London to deliver a confidential message to a woman with whom Edward says he has carried on a long-term relationship seems reasonable enough. And after handing over the letter, Julian agreeably provides the woman with an envelope and paper to write her reply, then patiently waits while she does so.

Small wonder that he eventually crosses paths with Stewart Proctor—“Proctor the Doctor . . . Head of Domestic Security . . . Witchfinder-in-Chief,” who’s on the trail of a dangerous information leak that seems to lead straight to Julian’s modest little shop.

Posthumous novels, particularly those left unfinished or not submitted for publication by the author during their lifetime, pose something of a problem. As Nick Cornwell describes it, he approached the manuscript with trepidation, expecting to find it incomplete or just plain bad.

However, he discovered that it was “fearsomely good.” Just the same, he had to ask himself why his father hadn’t passed it in for publication: “What held him back? What kept it in his desk drawer, to be taken out and redrafted again, and again put away, unsatisfying?”

Cornwell’s theory is that the story cut too close to the bone in terms of the shade it cast on the failings and shortcomings of the secret service for which his father once worked and to which he remained unfailingly loyal.

He’d certainly know much better than we would, presumably. However, it’s possible—in fact, quite probable—that Le Carré held this manuscript back because it just didn’t feel good enough to release into the stream of public readership.

While he was a master of the cryptic, turgid spy story heavily dependent on inference, association, and slender threads followed diligently to revelation, and while Silverview is written in this tradition, much of the uncertainty and mystery in the novel arise from an inconsistent writing style more than his famously furtive approach to storytelling.

Too many sentence fragments, unattached pronouns, and floating strings of confusing dialogue leave us constantly wondering what’s going on from one paragraph to the next, who’s being referred to in a given sentence, and what the objective of a particular scene might be.

As well, the novel gives us the feeling that Le Carré was thinking in terms of an extended storyline featuring these characters in other novels at some point in the future. As a result, it feels incomplete, perhaps almost half-baked. Is that why he held it back? Because he was having trouble imagining how exactly he would project it forward into future novels?

For one thing, the extent of Edward’s security breach is not entirely understood at the end of the novel. For another, while Stewart Proctor echoes George Smiley in some ways, with an unfaithful wife and a jaded view of the service to which he remains loyal, we ultimately feel that we’ve only just scratched the surface of who he is and where he’s going. Would Proctor have been led into further webs of domestic intrigue by Edward’s doings? And would we have understood him better in a subsequent story or stories?

Julian is also a character with whom Le Carré may have wished to do further work. Proctor reflects toward the end that the young man has shown potential as an intelligence officer. Would a sequel have featured the two of them?

As it stands, Silverview is certainly not a novel for which John Le Carré will be remembered. That honor will be shared by The Spy Who Came in from the Cold (1963) and Tinker, Tailor, Soldier, Spy (1974), two of the best spy novels ever written.

However, Silverview is a gift to scholars, aficionados of the genre, and readers at large eager for one last look at the creative mind of an acknowledged master of his field.