The Silver Swan: In Search of Doris Duke 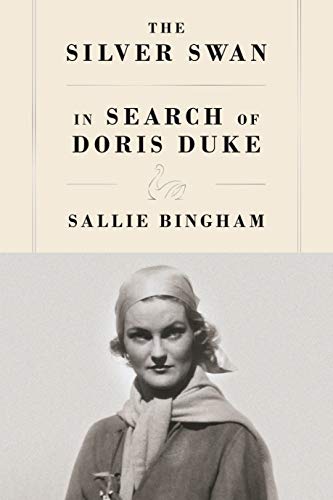 By some reckonings, for the last two centuries and more, America’s robber barons and brass-knuckle monopolists built their fortunes exploiting countless workers and consumers, sometimes fatally. Late in life, they established eponymous philanthropies designed to scrub their images.

And it worked. Critics hold that foundations, endowments and—especially—universities have burnished the legacy of these swash-buckling, cutthroat capitalists. The list of such prestigious private universities includes Rockefeller, Carnegie, Mellon, Stanford, Vanderbilt, and Rice.

Don't forget James Buchanan Duke, founder of the American Tobacco Co., Duke Power Co., and Duke University. “Buck Duke’s success mirrors that of the creators of other early-20th century fortunes in oil, steel and rails,” Sallie Bingham writes in Silver Swan: In Search of Doris Duke, her new biography of Duke’s only daughter.

Born in 1912, Doris Duke, to her credit, spent much of the next 80 years using her family’s tobacco gains to do good in their name, donating over $400 million dollars to various causes throughout her lifetime and after.

Despite her privileged birth, Doris faced significant hurdles growing up. Buck died when she was 12, and at 13 she successfully challenged several provisions of her father’s will. To Doris' great regret, her mother never allowed her to apply for college. She did spend one happy, memorable month at Duke University—incognito. Successful, long-term relationships eluded her. When she married, her only child, a daughter, died shortly after her premature birth.

Doris' first foundation, called Independent Aid, launched in the depth of the 1930s Depression, when she turned 21 and received the first portion of her legacy. Board members included Duke University's president and medical school dean. Independent Aid’s initial grants went to women’s relief groups and Duke University. Many were small gifts to individual women, widows, and divorcees.

They were, Bingham writes, “limited in their effectiveness,” in that they were “dissociated from the larger issue embedded in the culture . . . [her] understanding of social causes would come later.”

All this was apart from her father’s multibillion dollar Duke Endowment, whose board she joined in 1933, and whose stated purpose was to “nurture children, promote health, educate minds and enrich spirits.” Doris also made countless personal gifts, some of which grew out of her relationship with other socially conscious acquaintances of her class.

Some resulting criticism of Doris “rests on the buried bone of racism,” Bingham writes. But occasionally, as Bingham tells it, Doris Duke’s colorful, sometimes scandalous personal life eclipsed her philanthropy. Duke was a Hawaiian-trained surfer, a hula dancer, a jazz pianist, and a gospel choir singer in a predominately African American church.

Late during WWII, she was a foreign correspondent for the fabled International News Service, and volunteer secret agent for CIA forerunner the OSS. After the war she wrote society page news and soft feature stories, and worked as a photo assistant in the Harper’s Bazaar Paris office.

She invested in the Rome Daily American newspaper, which was 40 percent CIA-owned. The intelligence agency was then actively subverting the 1948 Italian election in order to prevent a Communist victory. A justifiable intrusion, Doris reasoned, because Italy then was “a country torn about by un-American political factions.”

Duke’s personal life was the stuff of tabloids and gossip columns, in particular her marriages and affairs with men and women. Arguably, the misogynistic times fueled this scrutiny. “Potent female desire invited scandalous innuendo,” Bingham argues.

Criticism of Duke’s extravagant living was more justified. She kept two camels at her Newport, R.I., estate, fitting them each with pink harnesses designed by famed Italian fashionista Elsa Schiaparelli. (Three Humboldt penguins and three sea lions died from the heat on her New Jersey estate).

Doris traveled in her own 737 (along with the camels), and had a face lift at 71. She posted a five million dollar bond for Imelda Marcos, wife of the former Philippine dictator, whom she saw as a bulwark against communism, and loaned Imelda five million more for her legal defense. Doris paid for the Mahareshi Mahesh Yogi’s Indian ashram, where the Beatles retreated.

Lauren Bacall and Susan Sarandon portrayed her in separate television movies about her colorful life.

Two of Doris’ nouveau riche Duke cousins married blueblood Biddles of Philadelphia, producing numerous Duke Biddles and Biddle Dukes. There were a few wastrels among them, to be sure, but by and large it was a good genetic match, producing two U.S. ambassadors.

Without the scandal, and on a much smaller scale, Doris’ cousin and devoted friend Mary Duke Biddle Trent Semans, whom Bingham cites, lived an exceptional life of philanthropy and political activism in Durham, N.C. Her focus was racial and economic equality, serving on the city council and as an active Duke University trustee.

Doris’ relationship with Duke University was quite different from Mary’s. Although Doris did give Duke University a two million dollar gift in the 1980s for AIDS research, she generally kept at arm’s length the university that bears her family name. In her research, Bingham found no portraits or busts of Doris on the campus, just one small photo in the corner of a garden she endowed.

Bingham feels Doris’ relationship with the university was at times “distant.” In this, Bingham confirms a widespread feeling on campus in the 1960s and 1970s. The reason for this distance from the university is not clear. But in 1951, the campus humor magazine, Duke ’n’ Duchess, ran a satirical article mocking her morals. The magazine was closed by university authorities, and the editor forced to resign, but the damage was apparently done.

One of the few times she returned to the campus was for her mother’s funeral and interment in Duke Chapel in 1962. Doris declined an invitation to attend Founders Day ceremonies on campus in 1992. Her cousin, former Ambassador Angier Biddle Duke, later wrote that he “understood from her absence that she had an aversion to the place.”

In 1974, workers at the Brookside coal mine in Harlan County, KY, went on strike against horrific working and living conditions. Operators of the mine, owned by Duke Power Co., resorted to violence and intimidation in their efforts to break the strike, immortalized by Barbara Kopple in her Oscar-winning documentary Harlan County, USA.

The dispute soon took on the aspect of a Duke family affair. At the time, Duke Power was controlled by the Duke Endowment, 79 percent of whose assets were in Duke Power stock. Duke University students picketed in support of the strikers on the Durham campus.

United Mine Workers President Arnold Miller wrote a six-page, heartfelt letter, outlining conditions at Brookside, to Doris Duke, who was on the Endowment Board. “As a trustee of the Duke Endowment,” he wrote, “you are involved not only in the Endowment’s philanthropic work, but in the policy and practices of Duke Power Co.”

Doris replied that “I was horrified to hear of the appalling conditions at the Brookside camp.” She promised to look into the dispute, consulting with her cousin Mary Duke Biddle, the only other woman and Duke family member on the Endowment board.

Whether and how much the two woman had any influence on the ultimate settlement, Bingham does not say. However, she suggests the United Mine Workers president might have had one possible impact on Doris. The letter “may have caused her to question, if only fleetingly, why her enormous financial donations went largely to arts organizations run by and for the upper classes.” But class will out. Ultimately, Doris “did not ally herself with the progressive movements of her period.”

Sallie Bingham’s admiration for her subject pervades the biography, which is not surprising. Herself raised in privilege in a Louisville, KY, newspaper dynasty, and a philanthropist, Bingham is well suited to tell this story. Bingham did much of her research at Duke University, where she endowed The Sallie Bingham Center for Women's History and Culture.

The biographer recounts that she first encountered Doris Duke at a Paris dinner party in 1958 when Bingham was a 21-year-old newlywed. The author recalls finding the Duke heiress “filled with power, authority and dignity such as I had never encountered.”

There are some problems with this otherwise competent biography, including dry patches bogged down with minutiae, marbled with facts and details that do little to advance or inform the narrative. Examples: her wardrobe, crackpot letters sent to her over the years, and the building and furnishing of Duke’s numerous homes, properties, and estates (none in North Carolina). At times it is also chronologically erratic.

Bingham utilizes informed speculation to fill in the gaps in Doris’ life, like imagining what Doris might have worn while living in Paris after World War II, and whether she would have supported early efforts to pass the Equal Rights Amendment.

Despite its early (and early discarded) Latin motto “Pro Bono Publico,” for the public good, Buck Duke’s American Tobacco Co. and its successor, British American Tobacco, were fueled by nicotine addiction. Many of the millions in medical research funded by Doris Duke and her charities' donations to Duke University and other institutions over the decades have gone to fight various forms of cancer caused by the same tobacco products on which her family’s fortune was built. A more accurate name for these donations would be “reparations.” The Duke University campus is now smoke free.

While Doris never smoked, Bingham writes, “It was difficult to consider the source of her fortune or to question her father’s role in the spread of smoking . . . No matter how large her charitable contributions, they cannot make up for the deaths of millions.”

When Doris Duke died in 1993, the bells at Duke Chapel tolled 80 times, and flags on the campus were lowered to half staff for a week. Mary Semans requested a portrait of her cousin to hang in the Duke Library, but her estate was unable to provide one. At her death, she left only $10 million out of an estimated $1.3 billion estate to the university. Bingham observed that “the university may well have been disappointed” by the gift.

A subsequent ruling on the disputed estate found that Doris’ will had the effect of “perpetuating the Duke family history of personal passions and conspicuous consumption.” Nevertheless, Bingham concludes, “In the end, her good works remain."

Mark I. Pinsky is a 1970 graduate of Duke University.