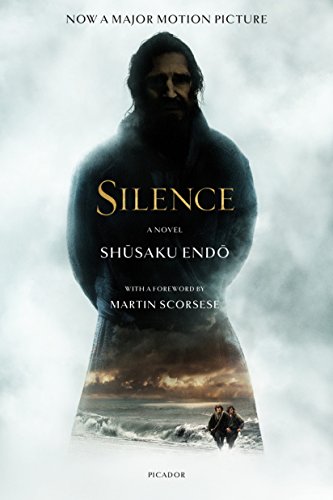 Originally published in 1966, with the first translation into English published in 1969, this latest edition of Silence has a foreword by Martin Scorsese who is soon to make “a major motion picture” of the acclaimed novel. It is a story that is perfectly pitched for the big screen, awash with conflict, human frailties, and of course, the ultimate villain: Judas.

Set in 1637, we follow two Portuguese Jesuit priests as they set sail for Japan in search of the truth about their friend and mentor, Father Christovao Ferreira, who is rumored to have apostatized after torture in “the pit.’’ The priests are also intent on bolstering the beleaguered Christians of Japan who are being persecuted and killed by Japanese leaders like the devious lord, Inoue.

On earth, these poor peasants face pain, taxes, and persecution and long for paradise in heaven. But as one of the priests, Rodrigues, tussles with his own faith and the silence of his God, he struggles to endorse their hopes amid such terrible suffering without a sign from God.

The story is largely told in letters sent by Father Sebastian Rodrigues to his Jesuit masters. He describes how the Japanese Christians are adept at hiding their faith from their tormentors: “the wisdom of peasants shows itself in their ability to pretend that they are fools. After a long period of interrogation, the exhausted officials were satisfied and went away.” But as the peasants struggle to survive, Rodrigues’s struggle is with his faith—the painful paradox of believing yet questioning.

Endo’s book shows the importance of “Christianity’s greatest villain, Judas”: the believer who questions, the man who follows in Christ’s footsteps. He is represented in this book by Kichijiro, a key figure no less important than our “hero” Father Sebastian Rodrigues, the “best and the brightest of the Catholic faith.”

Kichijiro sows the seeds of doubt—or nurtures seeds already planted in Rodrigues—by asking “why has Our Lord imposed this torture and this persecution on poor Japanese peasants? Father, what evil have we done?” This is the question at the heart of Mr. Endo’s story: Why is God silent?

As he witnesses the peasants sing about the temple of paradise during their torture, Rodrigues finds himself visualizing the silence of God, “the feeling that while men raise their voices in anguish, God remains with folded arms, silent.” He aspires to his own martyrdom, anticipating that the voice of God will sustain and comfort him in his torment.  He even anticipates his own Gethsemane and as Kichijuro deceives him, his faith is tested and he admits “from the deepest core of my being yet another voice made itself heard in a whisper. Supposing God does not exist . . .”

As Japan wrestles with the problem of ridding itself of Christianity, the Japanese Christians lay down their lives for a faith that Rodrigues now doubts. He is beset by his own demons, tortured by his God’s silence, knowing that the martyrs have heard the voice of Christ but for him “God was silent. Does that mean from the beginning those priests had no faith?”

The relationship between Rodrigues and Kichijuro is the key to this story and to our understanding of the priest’s torment. He has never been satisfied by the church’s analysis of Christ’s feelings for Judas as that of a betrayed husband, who will continue to love his wife, yet can never forgive her betrayal. Indeed he feels “Judas was no more than the unfortunate puppet for the glory of that drama which was the life and death of Christ.”

As the story culminates in Kichijuro’s need for confession and absolution, Rodrigues, too, resolves his own crisis. But the ending is less fulfilling, less satisfying than Endo’s book has encouraged the reader to hope for. Does it answer the doubts and questions of faith millions share with Fr. Rodrigues? That is doubtful. Does it challenge the reader to think beyond the rules and dogmas of faith? Indeed, it does.