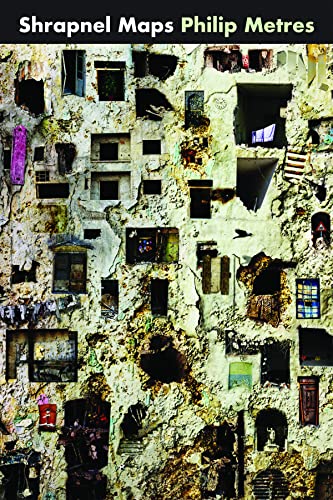 “The substance behind Shrapnel Maps is substantial and groundbreaking, and poet Philip Metres has created a compelling work within its covers that will bring a new view to everyone who delves into its space.”

There is a quietness to the poems of Shrapnel Maps, as if poet Philip Metres has in some way squeezed water from a rock. And yet, in his collection that skirts political discourse, the harsh reality of lines like, “for throwing a Molotov at a bus, Muhammed / spent a month his head buried in burlap,” finds itself facing the apposition of solace, “in the dark room—to her breast she quiets / Carmel, which means ‘God’s Vineyard.’”

a location and timeline both central to the world and as far removed as polar opposites can be. And in showing readers a significance through the impact of poetry, Shrapnel Maps steps out from behind the curtain of words and puts forward verse as if eyes were not the only way to see.

Metres’ collection begins with a saunter into this view through the opening poem, “One Tree”:

They wanted to tear down the tulip tree, our neighbors, last year.

It throws a shadow over their vegetable patch, the only tree in our

backyard. We said no. Now they’ve hired someone to chainsaw an

arm—the crux on our side of the fence—and my wife, in tousled

hair and morning sweats, marches to stop the carnage, mid-limb.

It reminds her of her childhood home, a shady place to hide. She

recites her litany of no, returns. Minutes later, the neighbors emerge.

The worker points to our unblinded window. I want to say, it’s not

me, slide out of view behind a wall of cupboards, ominous breakfast

table, steam of tea, our two young daughters now alone. I want no

trouble. Must I fight for my wife’s desire for yellow blooms when

my neighbors’ tomatoes will stunt and blight in shade? Always the

same story: two people, one tree, not enough land or light or love.

As with the baby brought to Solomon, someone must give. Dear

neighbor, it’s not me. Bloom-shadowed, light deprived, they lower

The effect is that of slipping through a crackled-open door, leading to a darkened passageway of thought that the reader may not yet be aware, as the subtlety of this entré into something to be revealed, lends the paint to the masterpiece that will evolve. A slight breath, a deeply filled chest and the exhale of Metres’ work begins its complexity of unwinding, as further developed in the poem that immediately follows, “Two Neighbors”:

In Cleveland, snow so thick it looked as if it were not falling but

hovering, I shuffled along the snowbanked side of Washington

Boulevard, halfway to campus, when a Suburban scrolled past,

slowed. The driver’s window lowered to a woman in copper wig. In a

Brooklyn accent, she asked if I needed a roide. I didn’t know her from

Eve. She was brave or kind or both. “I’m almost there,” I replied. She

said, “You’ll probably get there before I do!” We laughed together in

the falling snow, as she rolled up her window…

Into the minibus, near Jerusalem, the young Palestinian climbed.

He wore a pen in his oxford, black hair parted clean. We got to

talking where we were from. He hoped, he said, to study engineering
in Cleveland. The minivan braked. We pulled our passports. A

soldier barked something we couldn’t follow, the young man said

something we couldn’t follow, his hands dancing empty in the air.

The soldier grabbed his wrists. We pulled away (we couldn’t follow)

and he disappeared, surrounded by three soldiers, as we drew near

Metres’ Shrapnel Maps is divided into ten distinct sections, each demarked by various kinds of illustrations, such as old tourist brochures from the British Mandate era of Palestine but also including old documents, some of which have been altered into erasure poems. The book presents as a holistic and curated collection of poetry and art sharing the synergy engaged within a totality. This synergy is enhanced by the poet’s varied approach though techniques such as erasure, multi-part poems designed for simultaneous readings, prose poetry and other forms enhancing the narrative of the collection in support of its title.

In “Part IV, Theatre of Operations,” the poet presents poems as acts, with names as subparts of larger events. Selected from “Act Three, the Matter of the Flesh of One’s Flesh”:

I don’t care what he did. His body came from my body.

After the crashing, after the pushing, the waves of pain,

they cut the cord between us, & I brought him to my breast.

With his small mouth, without words, he called the milk out of me.

When we had nothing to drink but the salt of the sea, rain

was our dream. We slept under tin & stone & had no rest.

Also from “Act Three, the Matter of the Flesh of One’s Flesh”:

My flesh has swallowed an entire dream of heaven:

I’ve got a dozen screws floating around my spine,

holding nothing forever. For legs I wheel

this chair. My body’s locked in the pitying gaze

of strangers, family, in the moment he froze

The work that the poet has created, syllable by syllable in this collection, snakes its way forward, growing in its power, expanding the view presented to a reader in increasing effort of comprehensive potency, building eyes that see, ears that hear and a nose that smells

the scent of the landscapes inside.

That Metres has the wherewithal to gather such a broad base of work and art into one cohesive package is not surprising. He has authored ten books and has garnered numerous fellowships and prizes. The substance behind Shrapnel Maps is substantial and groundbreaking, and poet Philip Metres has created a compelling work within its covers that will bring a new view to everyone who delves into its space.