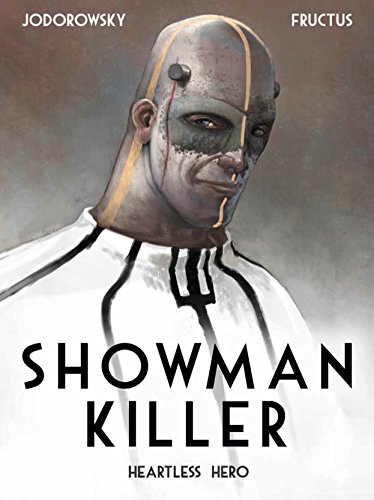 The story of a genetically engineered assassin, Showman Killer: Heartless Hero takes place in a far-off galaxy sometime in the distant future. Reminiscent of imperial galactic space opera stories such as Dune or Foundation, or even the much more capable graphic novel series Saga, Showman Killer: Heartless Hero doesn’t break any new ground in the genre.

While the illustrations by Nicolas Fructus are superb, the narrative and story lack any kind of original punch. It’s a story readers have read plenty of times: a killer trained his whole life to be nothing but suddenly finds a piece of his heart unfrozen. That’s about it.

The issues with the story could stem from this graphic novel being a translation from Jodorowsky’s native Spanish, but that may be stretching it. One of the classic cliches of storytelling is to “show, not tell” which would be hard for a graphic novel—something that is nearly completely show—to fail at. But Showman Killer: Heartless Hero does fail at it as almost every character has some dialogue that simply explains what’s going on or what they are thinking or why they are acting or some fine point of the narrative that hasn’t been made perfectly clear earlier.

There are times where the story gets interesting, but then those points are overshadowed by the weak points, which are many. It is as if a Mexican television telenovela was adapted into a graphic novel and no one thought to adjust the stunted and over the top dialogue to fit the new audience.

Jodorowsky has made some incredible films, some other great graphic novels, even been part of an amazing documentary on his decade long attempt to adapt Dune into a movie—all of which likely played into Titan Books publishing Showman Killer: Heartless Hero, but at some point an editor should have stepped in and fixed a few things before hitting the publish button. It plays like bad theater at too many points for someone not to have noticed. But when dealing with an auteur like Jodorowsky, maybe even an editor couldn’t help. The creator often has the final say at Jodorowsky’s stature.

To be fair, there are two more volumes of Showman Killer coming soon, so perhaps the issues in this volume are addressed and fixed in later volumes. That would be great for fans of science fiction graphic novels, as well as fans of Jodorowsky himself. But until those volumes can be explored, it would be wise to pass on Showman Killer: Heartless Hero.