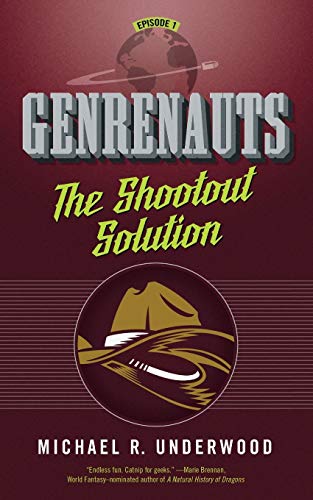 Have you ever wanted to be a character in your own book? Leah Tang has been one. Every time she reads fantasy fiction, she can be who she wants, and that is a strong, capable, intelligent, and sometimes magical woman, which is more than who the nerds, bros, and creepers that sit in her comedy show hope for—they just want her to flash her breasts. And soon, she will actually be able to be a character in a book—sort of.

Leah joins the Genrenauts Foundation whose mission is to minimize the effects and ripples various worlds can have on the real one. Stories live in their own worlds, these adjacent worlds are the ones that inspired the genres read today (Western, Romance, Cyberpunk, etc.), and every now and then something goes wrong, breaching their genre world and affecting what is called by the Genrenauts “Earth Prime.”

Smart and funny, Leah Tang is an Asian-American woman often disappointed by the tropes appointed to her ethnicity and gender, but these, plus her background as a standup comedian and her love of fiction, make her uniquely qualified to join Dr. Angstrom King’s team. Interestingly, Genrenauts is about stories and how readers use them, as Leah notes in her on-stage monologue at the comedy club, it is about becoming the hero she wants to be—she doesn’t have to be the sex symbol with large breasts and covered in snakes. And as each of the Genrenauts enter a story, they become the hero they want and need to be both for themselves and for the story and Earth Prime.

The opening chapter will hook readers immediately, and the payoff will be a fun ride if they can stick through the tedious introduction to Leah Tang’s character. Where the author could have described her failing to work comedic magic onstage to a house full of bro-types, the reader is subjected to her feminist and serious discussion about tropes and fantasy characters, which hardly makes for swift reading.

Teams of people who love stories and are dedicated to the truths behind the myths travel from around the world to investigate the breaches and set the story straight in whatever way they can, much like the plot line in Quantum Leap. In fact, once the individuals enter the genre or novel in question, they use Personal Phase Manipulators that create illusions as to their physical appearance. Each team member has his or her own genre specialties that match their abilities and methods in resolving the story breaches.

The job can be dangerous, as Leah finds out. Leah’s first assignment is to enter the Western world to help the good guys in white hats win again so the bad guys can stop affecting the real world, where the ripple effect has been a recent wave of violence in the streets of Las Vegas. (And when problems occur in Romance World, divorce rates rise on Earth Prime.) When The Shootout Solution opens, team member Mallery York is caught among flying bullets in a western genre novel trying to right the wrong. Leah and other team members are needed to help Mallery set western world right.

This is a science fiction comedy series according to the publishers, which makes sense; but the core of the novella itself will take place in another genre. For readers who have enjoyed shows such as The Librarians or Warehouse 13, this will be right up their alley. This has the potential to be a good TV show. This is a great novella for serialization, in fact, episode two is already available with The Absconded Ambassador.

The Shootout Solution: Genrenauts is clever but the execution falls a bit flat—the solution to the story is a bit too obvious and punches are pulled; the foreshadowing is less shadowing and more bright neon flashing. However, there is hope that as the series continues, there will be greater and stronger depth. The Shootout Solution: Genrenauts is very promising as a series.