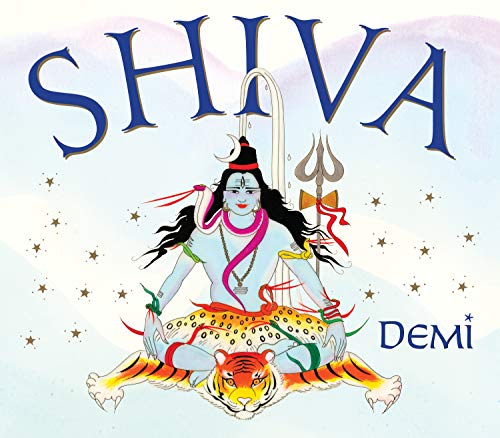 Known for her children’s books about religious figures such as Muhammad, Gandhi, the Dalai Lama, and the Pope, Demi’s latest picture book for children aged 4 to 8 focuses on the Hindu god Shiva.

In the Hindu trinity of primary gods, Shiva is perhaps the most complex and profound. Brahma creates the universe, Vishnu preserves it, and Shiva is known as “The Destroyer.” But he is so much more.

Hindus believe that Shiva's powers of destruction are used to destroy the imperfections of the world, paving the way for beneficial change. The destruction is not arbitrary, but constructive. He is seen as both good and evil, a blend of contradictory elements.

In Demi’s book, these profound concepts as well as biographical tidbits about Shiva are explained in clean, simple text. Unfortunately, the text is so reduced, it reads like bullet points in a PowerPoint presentation.

Demi begins by focusing on Shiva’s positive powers. “Shiva is the Hindu divinity who brings good fortune, grace, and compassion. He is the god of love, righteousness, forgiveness, longevity, protection, power, health, riches, and prosperity. He wears snakes around his neck, a tiger’s skin, and is covered with ashes.”

Brief stories explain why he wears snakes, a tiger’s skin, and is ash-covered. Jealous men set a tiger to kill him, but Shiva killed the tiger and wears the skin as a trophy over jealousy. Next these sages send a herd of wild deer to kill Shiva. Again he overcomes the fierce animals. He holds the image of a deer between his fingers as his trophy over instability.

The stories and lore about these gods are rich with humor, wit, and drama, but you’d never know it from Demi’s telling. Here is how she tells the tale of Shiva corralling the mighty Ganges River and bringing it from heaven to earth to bring life.  Demi tells the story thus:

“Once there was a king named Bhagiratha, whose ancestors were sent to hell. However, he was told that if the river Ganges were to come from heaven to earth and wash away their sins, they would return to heaven. King Bhagiratha went to the river Ganges in heaven. The river said, ‘I can come to earth, but I will need someone powerful enough to catch and control the water’s flow and not flood the earth.’

“King Bhagiratha thought of Shiva and went to him. Shiva then let down his long hair and caught the whole great river Ganges in his hair, thereby freeing the ancestors of the king and bringing life to the earth.”

In the hands of a master storyteller, this and other Shiva stories have so much potential to thrill and awaken the imagination of readers. However, Demi’s telling is prosaic. There is no drama, no excitement, no word pictures, no mood-setting. The stories aren’t gripping. They cease to be memorable and in the process, they lose their significance and meaning to the listener or reader.

The book’s saving grace is the brightly colored illustrations typical of Indian iconography that enhance each page. While children may drift from the text, they can enjoy the depictions of Shiva riding his white bull Nandi and flying on the back of his parrot. There is a charming family scene of Shiva with his wife Parvati and his two sons Skanda and Ganesha sitting on a lotus blossom.

The pictures showing the series of attempted assaults on Shiva’s life with a tiger, wild deer, a cobra, and a club-wielding dwarf hold more excitement than the telling.

The targeted audience of four-to eight year olds will enjoy the pictures, but may fidget when exposed to the dry text that is rife with sound bites and abstract concepts such as grace and righteousness. And children not steeped in the Hindu world view may be unsettled by Shiva’s tendency to dance, “in cremation grounds among burning bodies.”