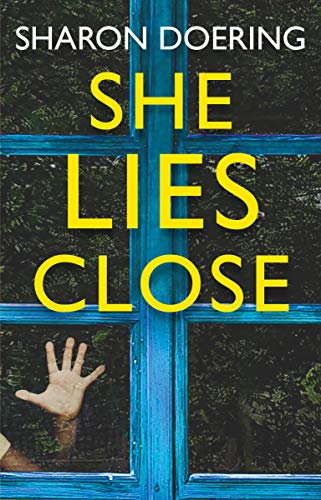 “Doering's wordsmithing is the absolute gold standard and leads readers to a stunner of an ending.”

If Grace Wright were your neighbor, she might appear to be quirky and odd. She jogs at night, leaving her kids home alone. She's delusional, paranoid, pops pills, has insomnia, and hallucinates. Her yard work timer is set to 15 minutes at best, and it shows.  She wakes up in the bathtub, the recliner lounge chair outside on her deck, in bed with her laptop in the covers. She's forgetful, neglectful, melodramatic and overwhelmed with her noisy, whip smart kids.

And she obsessively spies on her next-door neighbor.

Well, he is a suspect in a criminal case, the kidnapping and disappearance of five-year-old Ava Boone. No one told her that when she bought the house after splitting up with her cheating husband.

"Living next door to a suspected child kidnapper, murderer, is like walking past a snarling pit bull leashed on a worn, rusted chain."

She's terrified for her children. Especially after finding miniature Tootsie Rolls in her toddler's hand after the child slipped out of the house unnoticed into the back yard.

"If I were a deviant, if I were mentally warped, if I were a suspect in a child kidnapping, the candy I would always have handy in my pocket? . . . Tootsie Roll.

" . . . I bite into it, severing it with my teeth, not sure if I'm comfortable with the fact that I'm probing for a small bit of razor or some sickly oozing poison that he injected inside. My teeth sink into firm chewy chocolate with a hint of plastic. . . . No razors. No bitter poison."

Whether out in her yard or through the window of her own house, Grace's eyes are constantly on her neighbor.

"Behind my neighbor's second-story window, a small hand presses against the glass at the bottom ledge. Above splayed fingers, brown curls frame a little girl's face . . ."

Grace incessantly reads about kidnappings and child predators, even takes her laptop to bed with her at night where she spends four or five hours reading everything she can find:

"Who are your child predators? I can tell you. They are family members, stepfathers, and uncles. Women, too, . . ."

She also reads everything available about Ava Boone and her criminal case. Grace has done so much research on the Boone family, she can relate the tiniest detail about the parents, the house and all the siblings.

Not only does Grace obsess about her neighbor, her curiosity leads her to stalk the child's family: "I park on the street across from their house. . . . Ethan Boone is standing beside my windows. His mouth is a hard line . . . His anger is simmering, ready to burst into a boil . . . "

Her obsession finally compels her to sneak into her neighbor's house when he's not at home:

"I leave the crowbar on the cement porch and enter his house, my fingers gripping and regripping my sweat-slick hammer . . ."

The suspense is intense.

Author Sharon Doering puts you right into Grace Wright's head, so deeply embedded into the character, readers will at times become Grace Wright!

The entire book is written in stream of consciousness literary style and often goes off on tangents with detours into wordiness, but readers will enjoy every word of it. Doering's wordsmithing is the absolute gold standard and leads to a stunner of an ending.