Sharp’s Dictionary of Power and Struggle: Language of Civil Resistance in Conflicts 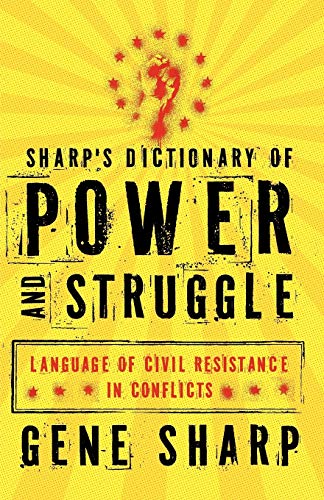 “According to the author the purpose of Sharp’s Dictionary of Power and Struggle is to ‘bring some degree of clarity to academic and public discussion of nonviolent action.’”

That misunderstandings may come from what we hear and say should be no surprise. Many words have many meanings—by their definition and by context. And of all words, abstract words may be the most difficult to understand. With abstract words you cannot physically point to examples, and when strong opinions are held—using, for example, any of the words in this short list: violence, nonviolence, politics, power—any misunderstanding can hold grave danger.

According to the author the purpose of Sharp’s Dictionary of Power and Struggle is to “bring some degree of clarity to academic and public discussion of nonviolent action.”

The belief that omnipotence, extreme dictatorship, and massive violence will always win is no longer always true. Those who want to reflect on recent history and the words people use for abstract ideas like power and struggle will find Sharp’s Dictionary of Power and Struggle a very useful tool.

The dictionary is prefaced with two essays. Each essay is written in a straightforward “just the facts” style and is a case study of a civil action that brought down a long running repressive regime.

The first essay, written by Joshua Paulson, is a short history of the people’s movement in Serbia from 1996 to 2000 against its then president Slobodan Milosevic. The precursor to the civil action came from Milosevic changing his country’s constitution to permit him an unprecedented third term run for president. That he lost and refused to step down was its immediate cause.

Protests were initially small but became a continuous series of ongoing non-violent actions. Civil actions included demonstrations, strikes, and job walkouts. Protests started as student-only but grew to include workers and (wow!) defectors from Serbia’s own police and security forces. Milosevic stepped down after Russia offered to block pressure to extradite him to the World Court.

The second case study was written by Jamila Raqib and covers the period from December 2010 to January 2011 in Tunisia where protests culminated in President Zine El Abidine Ben Ali going into exile. Tunisia in 2010 had only a facade of democracy. Its elections were a sham and its government regularly sponsored violence against protesters and arrested trade union members. The city of Sidi Bouzid was the center of protests that began after the self-immolation of a 26-year-old street vendor whose goods were confiscated by a local official.

The initial protests were held by friends and relatives but escalated into a riot that lead to a brutal police response. The police used truncheons, clubs, and guns to suppress protests shooting to kill. Police clashed with mourners of victims at funerals. Videos of these protests were posted to the Internet and to Facebook, and were picked up by Al Jazeera, which gave the protests a wide middle eastern audience. In reaction to this unwanted publicity, newspapers of political opposition parties were banned and their distribution blocked. Lawyers marched in protest, and were arrested.

Excesses of the Tunisian government were released to the Internet by the Wikileaks by exposure of U.S. diplomatic cables showing U.S.’s knowledge of rampant corruption and nepotism. Tunisia’s labor unions joined the protests, which spread to the interior of the country and also its capital, Tunis. Curfew was imposed in Tunis but protests continued in defiance. Protesters were killed in overnight clashes. Twitter was used to identify the location of police snipers, and the police began confiscating cell phones and preventing the injured from access to hospitals. The president, Ben Ali declared a state of emergency and then fled the country. In the weeks that followed protests erupted in Egypt, Jordan, Yemen, Algeria and Syria.

As this review is being written and edited in the fall of 2011, there are ongoing news reports of Syria murdering its own protestors, that Egyptian protests have restarted with dozens more deaths, and closer to home, the NYC police despite a judge’s injunction clearing Zuccoti Park repeatedly of its Occupy protesters. The police freely use mace and tear gas, beat, shove, and arrest students, reporters, and even grandmothers and a state judge.

Back to the topic on hand. There are 997 covered terms covered in the dictionary. Of these, 827 are defined, and 170 point to other entries. At the back of the dictionary the 997 terms are provided in list form along with a listing of 198 methods of nonviolent action. There are references, further readings, and acknowledgments.

How does one go about reviewing a dictionary?

In terms of dictionary format, terms are either defined or referenced (referenced as in, “See X” or “See also”). Definitions range in length from two sentences to two pages. Where meanings have been altered from traditional usage, for example where a term originally having a military or legal or some other context is now given a civil action context, the indication of change is identified by an explanation in parenthesis. For example: CAMPAIGN (reconceptualized term) and CASE (associated with nonviolent action).

In terms of word meaning, a simple test is to look up a word and compare that word against other dictionaries, which this reviewer has done. Conclusion? The definitions in Sharp’s Dictionary of Power and Struggle are pragmatic and sensible, a few even better than the standard definition, and the reconceptualized terms are not so extreme as to lead to new misunderstandings.

All said and done, there are however a few definitions that are absent. For example, while there are definitions for the terms: politics, government, democracy, and human rights there are no entries for these politically charged terms: constitution, court, law, due process, or even process, and rule.

Apart from judgment on word inclusion which can easily be remedied in future versions, the only immediate improvement a reader could wish for, which could also be easily be remedied (if the author and publisher permit), would be to have this dictionary available on the Internet.