Shake, Rattle & Turn That Noise Down!: How Elvis Shook Up Music, Me & Mom 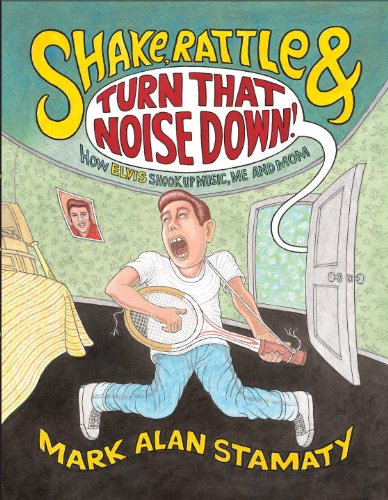 The title says it all. Shake, Rattle and Turn That Noise Down! How Elvis Shook Up Music, Me and Mom is a true story straight from author-cartoonist Mark Alan Stamaty’s boyhood.

Using a graphic (comic book) approach, Stamaty immerses young readers in the everyday details of the 1950s and his total fascination with Elvis Presley.

It all starts when his parents give him a radio for his eighth birthday. Harmless, right? But a year or so later, the speaker blares the announcement of a new singing sensation. Suddenly, Stamaty’s whole bedroom (not to mention the entire page spread) is filled with the wild howling of Elvis: “YOUAINNUTHINBUTAHOUNDDOG . . .”

He loves it—and turns up the volume full blast.

But on the next page, there’s a massively huge picture of his horrified mother who—as he puts it—looked like “a cornered hostage in a vampire horror movie.”

Elvis refuses to go away. And, of course, Stamaty becomes obsessed. He memorizes Elvis’ music, the lyrics, and the way he pronounces his words. He even figures out a way to style his hair like Elvis (and teaches all the other fourth-grade boys in his class to do the same). Everything culminates with the Blue-and-Gold Cub Scout dinner where he and his friends bring the house down with their very own Elvis show.

It sounds kind of corny, but the book works. With authentic visual detail, Mark Alan Stamaty shows his innocent admiration of Elvis, the unadulterated emotions of his mom, and a great resolution at the end. And because Stamaty is telling his story in retrospect, he can quickly fill in the details of rock-and-roll history.

No doubt, this book (which commemorates 75th anniversary of Elvis’ birth) is going to have lots of nostalgic appeal for older adults and anyone else who remembers box television sets, Cub Scout belt buckles, and the advent of the Elvis pompadour.

As for the appeal to today’s youth? It’s hard to say. Just because most adults have an interest or at least a curiosity about Elvis, there’s no guarantee that kids will react in the same way. Same thing with the rock-and-roll history. Yes, it’s interesting to see the cameos of the musicians who came before and after Elvis. But many kids won’t have a clue about Ike Turner or The Everly Brothers. Nor will many of them care.

But Stamaty is not out of touch with today’s youth. For one, the graphic format is extremely popular among young people (to the point where publishers are scrambling to include as many graphic titles in their lists as possible). And because of the graphic format, readers may be far more curious about the historical figures than if they were simply names on a list. Likely, the big connection between the book and today’s kids will be emotional. After all, there’s timeless appeal in loving something that your mom can’t stand—and finally showing her its value.

In any case, readers are going to have fun with the extra details that aren’t even part of the story. My favorite is the defaced Alfred A. Knopf borzoi logo on the bottom of the title page. Coming out of the famous dog’s mouth are the words “NOTHIN’ BUT A WHAT?!”

Stamaty, who is perhaps best known for his political cartoons, is no newcomer to children’s books. His titles include Who Needs Donuts? (1973; 2003); Too Many Time Machines (1999); and one of my all-time nonfiction favorites, Alia’s Mission: Saving the Books of Iraq (2005).