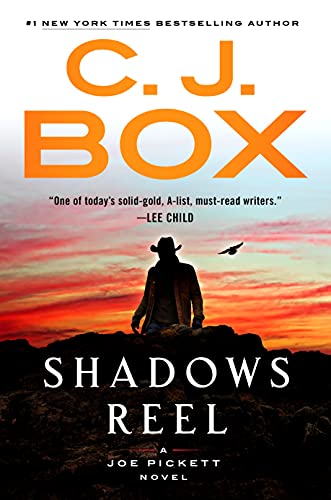 “Given the poor quality of Shadows Reel, many readers may think twice next time before spending their money on another dubious follow-up.”

Wyoming game warden Joe Pickett responds to a moose-poaching call and discovers the body of a local guide who was brutally tortured and killed. Meanwhile, his wife Marybeth receives an anonymous donation at the Twelve Sleep County Library consisting of a photograph album dating back to Nazi Germany.

As the family prepares to celebrate Thanksgiving under unexpectedly stressful circumstances, their friend Nate Romanowski has trailed a notorious falcon thief to Denver, where he becomes embroiled in late-night rioting and a subsequent pursuit into California and beyond.

Why was the fishing guide cruelly tortured before his murder? Why has a Nazi photo album turned up in Saddlestring, Wyoming? Will Nate be able to reclaim his stolen falcons and exact revenge on Axel Soledad, his enemy?

Shadows Reel is the 22nd novel in the Joe Pickett series by C. J. Box, a perennial New York Times bestselling author whose books are finding their way into film and television even as we speak. This one follows up on the action chronicled in Dark Sky (2021), in which Pickett took a bit of a pounding in the mountains before saving the day. He’s still limping around, feeling the aftereffects.

This novel similarly walks around on unsteady legs, wincing and grunting. It begins well enough, as Joe Pickett’s the guy we came to see, and another murder is what makes him so interesting, but before long the other characters crowd onto the stage, and Pickett’s reduced to a supporting role at best.

The novel struggles in large part because of the author’s attempt to follow two separate storylines, one focusing on Marybeth’s Nazi puzzle and the other on Nate’s pursuit of revenge. The stories don’t mesh, and Box is clearly uncomfortable in an urban setting.

His focus on the Antifa movement as the bad guys in the Denver midnight hoo-haw seems rather out of left field, so to speak, as though the author carries a personal enmity toward the movement and wishes to cast it in as critical a light as he can manage, whether it makes sense to his story or not.

His use of the Anarchy symbol as Antifa’s logo, his inclusion of a “Black Lives Matter” mercenary who joins in the pursuit of Soledad for his own mysterious purposes, and his proposal that Nate, who’s about as anti-government and isolationist as you can get, occupies moral center field in this one simply leaves us confused rather than edified.

Meanwhile, back at the ranch, the family Thanksgiving get-together is more forced and contrived than it is interesting. Pickett’s three daughters, Lucy, April, and Sheridan, all make cameo appearances with a lot of horsing around and beer consumption that passes the time, but the whole thing’s much less riveting than it might otherwise have been.

When the action finally gets into gear, a gigantic tank makes an improbable appearance in town to deter the two Hungarian bad guys causing all the trouble. Really? A Mine-Resistant Ambush-Protected (MRAP) wheeled armored vehicle? How Wyoming is that, right? Thank goodness we all appreciate a little whimsy in our Western crime fiction.

The best part of the climactic action takes place in the library where all the trouble began. A fleeing bad guy shoves the sheriff into the bookshelves, which topple over in domino-fashion and bury Pickett “under the deadweight of hundreds of pounds of hardcover books and the shelves themselves.”

Those of us whose homes and lives are dominated by books have had this nightmare, without question. Caught in an avalanche of our favorite reading material, forced to swim toward the surface, windmilling our arms and kicking frantically until we finally push our head free, gasping for air.

Been there; dreamed that.

Goodness knows where Box will take his characters from here. No doubt he has many other adventures planned for them in future novels. Given the poor quality of Shadows Reel, however, many readers may think twice next time before spending their hard-earned money on another dubious follow-up.

Has the Joe Pickett series finally run its course? Perhaps.