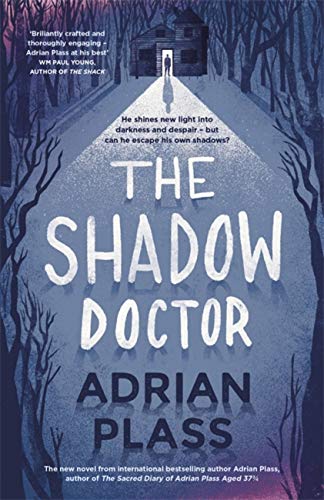 “We are only charged with loving people. The rest is not our responsibility. I would rather work with a fountain pen than be supplied with a nice, safe crayon in an institution.”

Jack Merton’s beloved grandmother left him a letter before she died. On the night she intended to kill herself she had met a stranger, alone, during a violent storm. The letter urged Jack to call her mysterious acquaintance, “if you ever think it might be a good idea to get in touch.” An enclosed olive–colored business card bore a printed phone number along with three words all in capitals: THE SHADOW DOCTOR. Gran’s letter spoke about his ability “to create community with very few words.”

Adrian Plass is the Anglican author of The Sacred Diary of Adrian Plass, Aged 37 ¾. It has sold millions of copies. His current novel flirts with questions of belief, lost hope, goodness, heaven, and the sustaining forces that allow one to get through life’s challenges. By his mere presence the Shadow Doctor makes it possible for the troubled to believe again in unseen forces, forces that make matters turn out right. Forces that persuade one to let go and not try to control outcomes.

The Shadow Doctor readily admits that “the trouble with prayer is that it doesn’t work.” He suggests that Jack come and work with him. Live with him in fact, in the middle of the woods, in the middle of nowhere. But why, Jack wants to know? “I’m a lonely, lost person who’s useless at making friends.”

But Doc reads people’s souls. He assures Jack that his is a safe place. “You can take risks. You can say dangerous things.” And so the master and apprentice tackle a man who is being blackmailed. And then a “lady who thought she might explode,” a beautiful young woman who lost everyone close to her in a matter of months. With little effort they get her to laugh.

Plass has a talent for sparse dialogue. His Shadow Doctor’s words are blunt and disarming. They hit the unlikeliest of marks. “Who are your ghosts, Sam?” he asks in words that are leading but also prescient and uncanny. “Someone has loved you, Sam. I can see it in you. . . . But who is it? Who is the special person in your life?”

The novel’s end reveals the special long–deceased person who still tugs at the Shadow Doctor’s soul. A photograph he’s removed is the spitting—“I’d prefer to say kissing”––image of the woman he loved most. Now empty and searching, he needs Jack as a “travel companion” to help him on his strange yet beguiling pursuit of reading others’ souls and mending them.