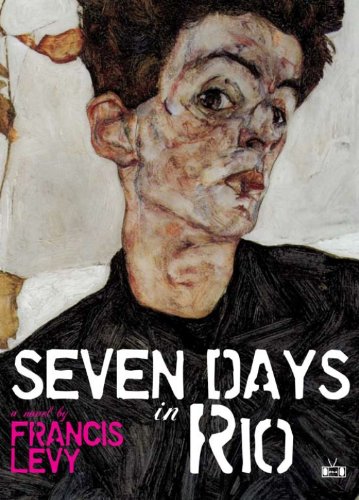 “This ironic and absurdist highbrow little sex novel is a hoot. . . . Mr. Levy’s humor is dryer than Monty Python’s but no less funny, and he combines high and low culture in a particularly appealing way.”

This ironic and absurdist highbrow little sex novel is a hoot.

The last time a work of the imagination caused me to laugh as often and as hard was in 1984 when for about a week after seeing the movie Monty Python and the Meaning of Life I could not stop myself from breaking into spontaneous fits of laughter as I recalled its explosive vomiting scene. Likewise, while reading and later recalling various scenes from Francis Levy’s Seven Days in Rio I frequently found myself in similar laughing fits. Mr. Levy’s humor is dryer than Monty Python’s but no less funny, and he combines high and low culture in a particularly appealing way.

The entire book is one drawn-out joke at the expense of its dorky first-person narrator protagonist, Kenny Cantor, a clueless 60-something (he attended Columbia as an undergraduate in the 1960s and public school in the 1950s) CPA, Jewish New Yorker, mama’s boy, and sex tourist. We accompany Kenny on his trip to Rio de Janeiro, Brazil, where among bikini and thong clad sunbathers he strolls the Copacabana wearing a Brooks Brothers seersucker suit, preppie white dress shirt, and bowtie looking for prostitutes—each of whom he addresses as Tiffany, regardless of her actual name or chosen pseudonym (he also mistakenly refers to local slum neighborhoods by the Spanish word barrio instead of the Portuguese favela).

Kenny’s goal over his weeklong vacation is to have sex with as many prostitutes as he can within the unnamed amount of money he has budgeted for that purpose (he figures each encounter will cost $100 U.S.) and converted into Brazilian reals, or in his private slang, reality. Hindering the achievement of his goal is his conviction that later the same day or just a few blocks away he will encounter whores even sexier than the one who is standing before him and offering herself up; Kenny seems to be more preoccupied with the pursuit of sex than with actually having sex.

His goal is also at odds with his long cherished desire to achieve a long lasting and meaningful relationship with a prostitute, a domestic arrangement in which he would continue to pay for sex, since he has absolutely no interest in having sex with any woman who will not accept payment. Indeed, Kenny prefers all his relationships to be fiduciary ones, which he compares to “buying shares in a company. If you had a controlling interest, you were able to influence the decision-making process. However, just being another shareholder was no fun, unless of course the company was reporting quarterly gains and had a significant price-earnings ratio.”

Straight women’s erotic romance fiction tends to follow the formula of an alpha-male selecting a plain Jane from among her many peers and rescuing her from either real danger or ordinary tedium. Straight men’s pornography usually portrays the fantasy that there are stunningly beautiful women who will have wild uninhibited sex with ordinary Joes. Kenny is a beta-male who happens to be affluent enough to afford to pay attractive prostitutes to have sex with him, yet his fantasy is to meet a sex worker who finds his non-monetary attributes compelling enough to want to build a life together, albeit in a relationship in which he still exercises financial leverage.

Mr. Levy has never visited Brazil, and his portrayal of the country is intentionally and absurdly exaggerated:

“’In Brazil, prostitution is totally legal and in fact encouraged, since sex tourism is such a vital part of our economy,’ Tiffany volunteered as she danced with her skirt hiked up and her hands held behind her head. ‘I learned English so that I could communicate with the customers I started to see as soon as I turned 18 and my parents felt I was ready to turn tricks.’

“’It’s great that your parents encouraged your independence.’

“’I learned that my body was a commodity. People often think of Brazil as a third world country, but we have an exceptional educational system. I learned about Joseph Schumpeter’s concept of creative destruction in high school history. It’s what finally made me see how I could effectively exploit my assets.’”

Kenny assumes that one in four Brazilian women are prostitutes, that there prostitution is an esteemed and accepted profession passed down from grandmothers to mothers to daughters (including members of the industrial and intellectual elite—Herbert Marcuse and Susan Sontag appear to be favorite authors of Brazil’s sex-worker intelligentsia), and that it is acceptable to proposition any woman he fancies, including hotel staff. The last of these absurd assumptions seems less funny in view of the 2011 incident involving former IMF chief Dominique Strauss-Kahn, though at no point does Kenny ever attack or force himself on anyone.

And how does Mr. Cantor discern Brazilian sex-workers from women who are not prostitutes? The whores lift their micro-skirts and show him their vulvas to prove they are women and not male or pre-op transsexuals. This also allows him to disqualify those who have Brazilian waxed vulvas, which he associates with pedophilia, reflecting his preference for unshorn natural pubic hair that he ironically compares to topiary. Kenny has no qualms about objectifying women. The description he gives the hotel concierge of the physical features he desires in a prostitute “reminded me of the way my mother ordered fish over the phone: ‘I want a nice piece of salmon, not too fatty.’”

As a young man, Kenny’s original career goal was to become a gynecologist, but when his mother declared her intention to become his patient (“Why should I pay a stranger?”) he switched to accounting. Apparently he would rather spend his professional life looking at ledgers than to ever see his own mother’s vagina. When not at his day job or paying for sex, Kenny has another passion: psychoanalysis, and he follows its various schools of thought and therapeutic approaches the way other people follow sports teams.

It just so happens that the same week as Kenny’s stay his hotel is hosting an international psychoanalytic conference on the topic of erotomania, the delusion that one is sexually and/or romantically desired by a stranger who isn’t even aware of one’s existence, which is also the title of Mr. Levy’s first and previous novel. While attending one of the conference’s lectures he meets a North American female analyst of Japanese ancestry whose attire resembles that of a prostitute (including clear plastic high heels) who was named by her hippie parents China (rhymes with vagina) Dentata with whom he enters a kind of Lacanian analysis. Mr. Levy’s parody of French psychoanalyst Jacques Lacan’s variable-length sessions is a series of one-minute sessions, between each of which Kenny leaves Dr. Dentata’s room, waits ten seconds, knocks on the door, and then begins again.

During the sessions Kenny sits below a widescreen TV on which China, who sits opposite him without panties, her micro-skirt hiked up, her heels on her chair, and legs drawn up to her chest revealing her vulva, watches soccer matches. These sessions are perhaps designed to help Kenny confront his Oedipal feelings, feelings exacerbated by the fact that when not attending lectures or treating Kenny, China is carrying on a nonexclusive yet torrid affair with her mentor. This episode allows Kenny to share with the reader his comparison of psychotherapy with prostitution:

“What goes on between analyst and patient is the substance of analysis itself; it is the content of the transference, significant in that it shows the patient the behaviors and emotions he demonstrates in all situations of his life. I was having fantasies about my analyst similar to the ones I had with all the women in my life—except my mother. I imagined fucking them, which wasn’t surprising since the women I was attracted to were inevitably prostitutes, whose role in life is to entice men into paying for sex. . . . My mind was racing with all the new issues the prospect of a sexual act with my analyst raised—issues that I plainly hadn’t wanted to face. Among them was whether I could now call China Tiffany. I was paying China and was at least on the verge of having sex with her. But the payments were for psychoanalysis, and I wasn’t sure that the money I forked over for our sessions could be credited toward sex.”

Kenny’s therapy with China is a narrative counterweight to his pursuit of and various encounters with prostitutes. I won’t reveal whether or not Dr. Dentata violates her professional ethics nor whether Kenny is any wiser at the end of his sex vacation, but he returns home still believing that many if not most attractive women are prostitutes named Tiffany.

There is one minor quibble with the cover art: Egon Schiele’s striking 1912 self-portrait was done when the artist was 22, considerably younger than the book’s protagonist. Is there no suitable painting by a Brazilian artist? Apart from that small complaint, Seven Days in Rio is enthusiastically recommended to sophisticated readers whose sense of humor includes a sense of the absurd—and strongly discouraged for literal readers lacking a sense of irony.