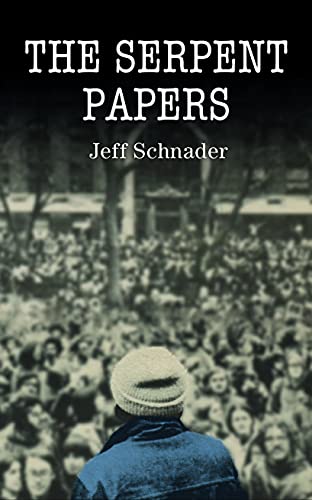 “Schnader’s writing is multi-sensual and powerful.”

For those who lived through the Sixties, it was an adrenaline rush that forever changed the world. (For younger and older generations, this viewpoint may seem egotistically overblown.)

The debut novel The Serpent Papers paints a vivid panorama of that traumatic era through a turning-point year in the life of Joseph Bell, known as J-Bee. As an admiral’s son from Virginia who enrolls at Columbia University in the midst of protests against the Vietnam War, J-Bee obviously personifies the broad national clash between traditional views of patriotism and youthful rebellion. But because of the extremes of his background, he also confronts more heavy-duty issues, including drug deals that go bad, several varieties of guilt, and killings thousands of miles from the battlefield.

By coming to Columbia, J-Bee thinks, “I would walk the ivied quads at the hub of the Weather Underground, but whether to strike the stone of the liberal hippie world with the conservative hammer of my fathers or to shatter my soul and shake my genealogical tree by joining the forces of as yet unknown, long-haired brothers was unclear to me.”

The defining moment of J-Bee’s life before Columbia is the horrendous death of his younger brother, Jerry, when J-Bee is 15. As two high school bullies chase Jerry, he barrels on his bike onto a busy roadway, to be crushed by “relentless traffic moving with idiotic purpose through time and space.” In revenge, J-Bee brutally beats up the bullies.

In a way, the beating is only a natural extension of the violence permeating J-Bee’s youth. The nuns who teach in his Catholic school regularly whip the students, “their mouths taut in the grimace of attack.” His “formidable warrior” of a father makes it clear that J-Bee is expected to join the family business.

In 1971, after graduating from high school, J-Bee’s closest friend, Gilly, volunteers for Vietnam, while J-Bee heads to Columbia, unprepared for drugs, long hair, and student sit-ins.

Over the course of his freshman year, J-Bee is bombarded by a tornado of influences. One group in his dorm tries to recruit him for their secret right-wing club. Down the hall, the charismatic student Milo hosts never-ending drug parties. Enthralled by his physics and philosophy classes, J-Bee studies all night in the library. Meanwhile, his girlfriend, Margo; a World War II veteran named Bloom; and a mysterious guru, The Serpent, gradually persuade him of the immorality of the Vietnam War.

J-Bee’s initial naiveté and prolonged political education are the novel’s big weakness. Yes, he was raised in a devoted military family and a milieu that scorned “long hairs.” But he wasn’t raised in a cave. By the time he arrives in New York, widespread protests have already forced President Lyndon Johnson to abandon his 1968 re-election campaign, and TV screens are crammed with gory images of the war.

Luckily, author Jeff Schnader—a professor of medicine who was active in the antiwar movement at Columbia during this book’s timeframe-–uses J-Bee’s naiveté as an opportunity to explore the Sixties from a wide range of angles. The sharpest is Gilly’s agonized journey from patriotism to guilt.

Schnader’s writing is multi-sensual and powerful. As J-Bee prepares to board the subway one morning in winter, “a warm stale blast hit my face, saturated with soot and ozone from the subways. The heat relaxed my muscles, casting a pall of lassitude upon me, and I heard, somewhere deep below in the bowels of the slumbering city, the rumbling of great metal behemoths, the contrivances of mechanically oriented minds, rattling and banging their ways through the black corridors of another world.”

At the end, a middle-aged J-Bee shrugs that the “age and times” that shaped him so dramatically “are all but forgotten . . . enshrouded in a world of misty gray, neatly tucked away in remote corners of library stacks.”

This book proves that he’s wrong. Fairly or not, the Sixties are still the lodestar against which great cultural shifts are measured.