Separated: Inside an American Tragedy 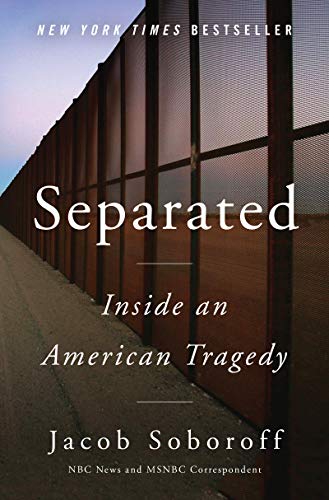 It is late at night on June 4, 2018, and under cover of darkness a father and son, carrying nothing but a backpack, approach “a short wall painted dark” that demarcates the international border between Mexico and the United States. After an exhausting two-week-plus, 2,000-mile journey through dangerous drug-cartel-infested terrain, they have reached their destination. They hop over the wall. On the Arizona side, they take in “the fences, the desert, the bright lights, and . . . a waning gibbous moon,” and realize they are a long way from Petén, Guatemala, where drug traffickers had taken hold of their community and targeted the father for retribution.

He and his son have come to America for what they hope will be a better life. What they do not know is that the danger isn’t over. By the end of that evening the father, Juan, and his 14-year-old son, José, would be separated by U.S. Border Patrol agents acting on orders to crack down on border crossings and penalize those who enter illegally. Juan and José would be locked away for months in separate detention facilities, thousands of miles apart, with no easy way to communicate and no certainty of being reunited.

In clear, lucid prose, occasionally punctuated by government speak, Jacob Soboroff draws back the curtain on the harsh government policy that separated thousands of migrant families at the border, starting unofficially in 2017, soon after President Trump took office, and then officially ramping up in the spring of 2018.

In Separated: Inside an American Tragedy, he goes behind the news headlines to reveal shocking truths. As a correspondent for NBC News and MSNBC, Soboroff had been on the ground covering the story and became “fixated” on a policy that was “ripping families apart.” When it ended, questions remained: Why was the policy’s implementation “so needlessly cruel? Why was its ending so astonishingly sloppy? And why were its ramifications so ill-considered?” By tracing email conversations and key inflection points, and tracking down documents, transcripts, and recordings, as well as speaking with sources, old and new, Soboroff wants answers.

As the Trump administration came in to office, Soboroff shows that as early as February of 2017, family separation policies were being discussed. Within months, an increasing pattern of separations was noted at the border. By April of 2018, news leaks confirmed that several hundred children had already been separated from their parents. On May 5, 2018, Secretary of Homeland Security Kirstjen Nielsen signed the order making the policy official. The driving rationale was to lower the number of people crossing the border illegally in order to make good on the president’s campaign promise to end undocumented migration. “The thought was that word of the separations happening would deter other migrants from coming at all.”

As a correspondent, Soboroff personally witnessed the horror that the policy inflicted on children when he was invited to tour a facility called Casa Padre in Brownsville, Texas, “not far from where the Rio Grande meets the Gulf of Mexico.” It would be the first glimpse any reporter would have of the living conditions of children detained under the Trump policy. As he toured the 250,000-square-foot facility, a former Walmart that housed almost 1,500 young boys between the ages of 10 and 17, more than 400 of whom had been separated at the border, Soboroff’s impressions were of “organized chaos” and confinement. There were set times for eating and sleeping and two hours of recreation allowed each day in a “dirt field” outside.

After the tour, which did not allow any cameras or cell phones inside, Soboroff walked outside  and spoke into the TV camera set to go live, telling his MSNBC colleague, anchor Chris Hayes, and the world: “This place is called a shelter, but effectively these kids are incarcerated.” He would tell Hayes, “Casa Padre is one of a hundred facilities like this across seventeen states.”

In fact, as Soboroff toured Casa Padre, 14-year-old José, now classified as an unaccompanied alien child (UAC) under the care of the Office of Refugee Resettlement (ORR), was being held in a similar facility in South Texas, having been flown there from Arizona. His father Juan, meanwhile, had been charged with a criminal, instead of a civil, offense for crossing the border, thus making it necessary to separate him from his child. Juan had been shackled and hand-cuffed and sent to a federal prison in California, “home to convicted murderers, rapists, and gang leaders.”

Soboroff writes that the policy was an “avoidable catastrophe” that could have been made better “at multiple inflection points.” It was implemented without much forethought, he shows, and with little concern for the welfare of children and families. Asylum-seekers like Juan and José (whose names were changed for their protection and to maintain their privacy) were routinely denied the opportunity to claim asylum, Soboroff finds, and, most disturbingly, the U.S. government had no system of tracking the children for the purpose of relinking them with their parents. The policy inflicted untold psychological harm, Soboroff writes, drawing conclusions from expert sources, and agrees that “torture,” as one group put it, is “exactly what it was.”

After growing outrage and heightened scrutiny, on June 20, 2018, President Trump ended the policy of family separations, but it would take a class-action lawsuit to force the government to reunite children with their parents. Soboroff makes clear that no one in the government was keeping an accurate count of how many children were being separated. The final numbers show that at least 5,556 children were taken from their parents. But still to this day no one knows exactly how many families were separated.

As the details unfold, Separated gathers force and in the end is a powerful indictment of a policy that shocked the nation and traumatized thousands. At the heart of the story, of course, are undocumented migrants like Juan and José, and throughout the book interstitials appear in between each chapter capturing family separations through primary sources. Soboroff writes that Juan, whom he met through an asylum attorney, agreed to share his story so that what happened to him and to his son “would not happen to anyone ever again.”

Heather Tamir is the Editorial Manager at PolicyLink, a national research and action institute advancing racial and economic equity, and has worked on international development programs at The Rockefeller Foundation.