Separate: The Story of Plessy v. Ferguson, and America's Journey from Slavery to Segregation 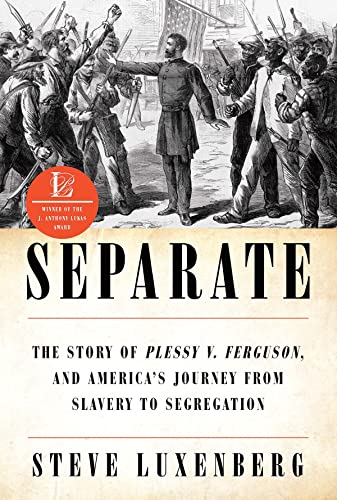 “In documenting this country’s fateful journey from slavery through thwarted Reconstruction to segregation, Luxenberg paints on a broad canvas, elegantly narrating several captivating and scrupulously researched stories that converge in Plessy v. Ferguson.”

Plessy v. Ferguson, the 1896 Supreme Court decision that established the principle of “separate but equal” and helped define the next 70 years of segregation and racial discrimination in the United States, is arguably one of the best known cases in the history of the court. Yet ironies abound in what we generally understand about it.

Harlan’s dissent, which cited the “color blindness” of the equal protection clause in the U.S. Constitution (among other things), famously formed the foundation of NAACP Chief Counsel Thurgood Marshall’s argument before the Supreme Court in Brown v. Board of Education, the 1954 case that effectively struck down Plessy and ruled school segregation unconstitutional.

In subsequent years, Harlan’s Plessy dissent has served to defend women’s and gay rights in the courts. But justices have also applied Harlan’s dissent to attack affirmative action, most recently in the strident opinions of Clarence Thomas, Samuel Alito, and the late Antonin Scalia, as legal scholar Melvin I. Urofsky notes in Dissent and the Supreme Court.

In Pulitzer Prize-winning journalist Steve Luxenberg’s Separate: The Story of Plessy v. Ferguson and America’s Journey from Slavery to Segregation, Plessy emerges as much more than a segregation test case involving a light-skinned French-speaking Creole man arrested for refusing to move to a Jim Crow car on a Louisiana train. Rather, Luxenberg convincingly casts it as the culmination of America’s 50-year progression toward codified and entrenched racial separation.

In documenting this country’s fateful journey from slavery through thwarted Reconstruction to segregation, Luxenberg paints on a broad canvas, elegantly narrating several captivating and scrupulously researched stories that converge in Plessy v. Ferguson. The dramatis personae he presents at the start of the book sketch out the compelling stories he’ll tell, beginning with the transformation of John Marshall Harlan from proud slaveholder to founding Know Nothing to die-hard Republican to the Supreme Court’s most outspoken advocate of legal (though not social) equality for African Americans.

Truly fascinating is Separate’s account of the strange career of lead Plessy counsel Albion Tourgée, a passionately polemical white newspaper columnist and Radical Reconstructionist. Prior to Plessy, the Ohio-born Tourgée found fame, infamy, and fleeting fortune as a bestselling political novelist and a prominent player in the post-Civil War North Carolina constitutional convention. Moreover, as Luxenberg describes, Tourgée once undertook an entrepreneurial experiment in freedmen agricultural land ownership in North Carolina as inspired and quixotic in its own way as John Brown and Gerrit Smith’s efforts with runaway slaves in North Elba, New York in the 1840s.

But arguably the most intriguing character in Separate is the uniquely multiracial society of New Orleans itself. After the Civil War, the United States essentially divided into three groups (gendered nomenclature notwithstanding): whites, freedmen (black former slaves freed by the Emancipation Proclamation and the 13th Amendment), and freemen (former slaves freed by various means before the war). The freemen were by far the smallest group.

New Orleans’ sizable population of les gens de couleur libre—free citizens of partially African descent who were often wealthy and phenotypically white, multilingual, and generations removed from slavery—defied the dominant white-black binary of race in the United States. Much of this population proudly claimed free soldiers who fought alongside Andrew Jackson in the Battle of New Orleans (1815) in their family pedigree.

The free Creoles’ atypical social status confounded the Union soldiers who occupied the city during the latter stages of the Civil War. Later, their insistence on an accelerated path to social equality challenged the gradualism of the northern Republicans who tried to reconstruct Louisiana after the war ended.

Of course, the prevalence of white-on-black rape throughout the era of African American enslavement and beyond produced generations of biracial Americans, precisely the sort of race-mixing that white supremacists hypocritically railed against. But the complexities of race in New Orleans were a thing apart, little understood by the rest of the country.

For this reason and others, the test case that became Plessy v. Ferguson was a tremendous if well-intentioned gamble, and a monumentally costly one, as Separate makes clear. Separate presents Plessy as the culmination of the tumultuous decades from the early struggles of Frederick Douglass and others to defy railcar segregation in the 1840s, to the Fugitive Slave Acts and Dred Scott v. Sandford of the 1850s, through the Civil War and emancipation and the final repudiation of Reconstruction.

In the minds of many Americans, Plessy v. Ferguson also bookends an era that concludes with Brown v. Board of Education (1954) and the Montgomery Bus Boycott of 1955-56. But the parallels between Plessy and Montgomery aren’t what they may seem.

Recent scholarship has worked hard to banish the popular misconception of bus boycott instigator Rosa Parks as a humble seamstress with tired feet. Highlander Folk School-trained activist and unflagging NAACP rape investigator though she was, Parks, by her own admission, boarded the Montgomery bus that day without a plan. She recalled the recent brutal murder of Emmett Till and made a spur-of-the-moment decision to refuse to surrender her seat, with no real strategy yet in place for the boycott that followed.

Homer Plessy, by contrast, was a Citizens’ Committee member handpicked to participate in a test case in 1892. He did so with the full cooperation of the railroad company (who wanted a clear resolution of whether they had to provide extra cars that they might not fill, and whether the law would require their conductors to make definitive judgments on their passengers’ racial status), and a planted white passenger who would follow a script and object to Plessy’s presence in the whites-only car.

Four years later, Albion Tourgée’s brilliant and sometimes perplexing argument before the Supreme Court reflected both a keen understanding of the court’s ever-narrower interpretation of the 14th Amendment (as focused largely on property rights) and peculiarities of New Orleans society that the justices probably didn’t fully comprehend. Tourgée argued that Plessy’s partial whiteness (seven-eighths of his racial heritage) and the prestige that whiteness conveyed were, in fact, Plessy’s property—“the most valuable sort of property, being the master-key that unlocks the golden door of opportunity.” Denying his whiteness without due process, Tourgée insisted, meant denying his property rights.

“Opting for a novelist’s dramatic climax,” Luxenberg writes, Tourgée presented his closing argument: “Suppose a member of this court . . . should wake tomorrow with a black skin and curly hair—the two obvious and controlling indications of race—and is traveling through the portion of the country where the ‘Jim Crow Car’ abounds, should be ordered into it by the conductor . . . What humiliation, what rage would then fill the judicial mind!”

Tourgée also argued for color-blind law, insisting that Congress had intended to end not just slavery but also the caste system than enabled and perpetuated when it passed the 13th and 14th Amendments and the Civil Rights Acts of 1866 and 1875. All of the judges except Harlan summarily rejected these contentions as fallacy “too clear for argument.”

Luxenberg raises a number of fascinating post mortem questions about the efficacy of Tourgée’s case and Plessy v. Ferguson itself. “An inventive argument, but a risky one,” Luxenberg writes. “What if the justices ruled that people of mixed race were exempt from the law, allowed to choose either the white or colored car? Separation would remain. Nothing would change. A winning point in a losing cause.”

Given the prevailing trajectory of the court in 1896, was it really the right time to launch another civil rights test case after the flurry of more narrowly decided cases that had recently preceded it, and give the justices an opportunity to issue a broad, overreaching ruling on racial separation, dismissing it as a social rather than a legal issue? Was it the right time to ask, as Tourgée did, if “a single drop of African blood [was] sufficient to color a whole ocean of whiteness”—a view that predominated in this country, as codified by the Plessy decision, throughout much of the century that followed?

In Right to Ride (2010), historian Blair M. Kelley places Plessy v. Ferguson in the context of similar contemporary challenges to segregation—boycotts of segregated streetcars shortly before and after the Plessy case. Kelley argues that “segregationists better understood the national outlook, which was increasingly turning a blind eye to discriminatory southern policies. The mob mentality that fueled assaults by white passengers against African Americans seated in first-class cars now also governed southern state legislatures.”

Kelley also raises the significant question of why Martinet, Tourgée, and the Citizens’ Committee didn’t choose a genteel Creole woman as their test subject. “A woman would have been a more sympathetic figure,” she argues, given that the Jim Crow car typically sat a thin partition away from the smoking car. Relegating a woman to this car would have meant forcing her to sit alongside not just Negro men of varied social status but smoking, drinking, aggressive white men.

We’ll never know how the court might have responded to other hypothetical approaches. As it was, the majority reflected on Tourgée’s arguments and concluded, “It would be running the slavery argument into the ground to make it apply to every act of discrimination.”

In hindsight, it seems abundantly clear that a majority opinion such as the one handed down in Plessy v. Ferguson was ripe for the sort of prescient dissent that discerned not just the constitutional issues at hand but the dire consequences of the judgment that the majority opinion does not.

Much like Associate Justice Ruth Bader Ginsburg’s withering dissent in the Voting Rights Act gutting Shelby County v. Holder (2013)—“throwing out preclearance when it has worked and is continuing to work to stop discriminatory changes is like throwing away your umbrella in a rainstorm because you are not getting wet”—such a dissent may serve, in the words of former Stanford Law Dean Kathleen Sullivan, as “buried ammunition for future generations to unearth when the time comes.”

One can only hope.