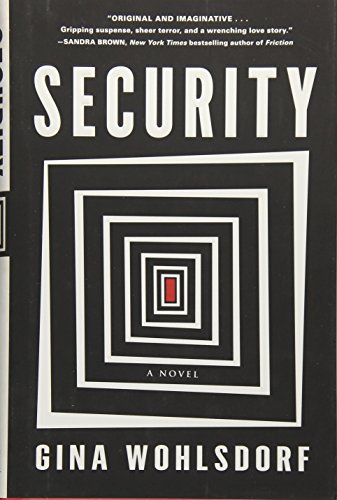 “Security is a fast-paced, highly evolved thriller that clearly marks Wohlsdorf as a force to be reckoned with.”

Imagine Agatha Christie transported to the digital age. And Then There Were None would certainly read differently, with Vera Claythorne and Philip Lombard sending each other panicked Snapchats as the figurines of Soldier Island disappeared one by one.

Now place Michael Myers (not the Canadian comedian, but rather the serial killer in a bleached William Shatner mask) inside of Dame Christie’s murderous maze. If you just add a pinch of Daphne du Maurier and the claustrophobic terror of Stephen King’s The Shining (plus that novel’s starkly terrifying hedge maze), then you have something resembling Gina Wohlsdorf’s debut novel Security.

The novel’s plot is as simple as it is chilling. A few nights prior to the grand opening of the lavish Manderely Resort, Charles Destin, the wealthy owner of the Destin Management Group, tells his electricians, landscapers, cooks, cleaning staff, and most importantly his project manager Tessa to make sure that everything is properly prepared. Destin is a tyrannical rich boy who is obsessed with security because his father, a career diplomat in Sierra Leone, was killed by a cheap IED glued to a room-service food tray. As a result, his resort is designed to be the safest place on earth—a solid white monolith of glass on a secluded stretch of Santa Barbara beach. Inside and outside of Destin’s fortress for the elite is a fleet of top-of-the-line security cameras all manned by a security staff composed of former U.S. Navy SEALs. Manderely appears to be impregnable.

The horror and happiness of Security commingle often because each parallels the other. While the coldhearted Tessa reunites with her former lover/foster brother Brian, a professional motocross rider, a pair of mercenaries stalk the halls and secret elevators of Manderely. Known simply as the Killer and the Thinker, the unnamed narrator describes the assassins as former SEALs who cut their teeth during the quiet, dirty operations of the 1980s. Somewhere along the line they decided to go rogue, and someone (it’s never discovered who) paid them handsomely to kill off the staff of Manderely before the resort’s opening day.

In a not so subtle nod to classic American horror, Wohlsdorf gives her bogeymen knives and puts them in the garb of Michael Myers. The only telltale sign that these are contemporary slashers is the fact that they communicate via text.

Wohlsdorf tells her gory tale with gumption and innovation. For instance, when the novel’s action becomes multipronged, Wohlsdorf splits her scenes in two by literally slashing pages into separate sets of text. This move is replicated by the constant presence of camera eyes throughout Security, with each chapter bearing the numbers of specific cameras. As a result, Manderely becomes the surveillance state in miniature. This is both frightening and reassuring, for the cameras silently watch and record the murderous violence without intervening, while also ultimately playing a decisive role in novel’s climax.

Although driven heavily by pervasive technology, the plot of Security is a classic love triangle featuring some seriously disturbing particulars. For instance, Tessa and Brian share a turbulent past that involves babies being left behind in Tacoma Dumpsters, abusive foster parents, sex before the age of eleven, and a dead heroin addict for a brother. Likewise, Tessa’s other love interest is a cyborg—a once proud man reduced to becoming a part of Manderely’s larger machine complex after his spinal column is nearly severed by a murderer’s knife.

Security is a fast-paced, highly evolved thriller that clearly marks Wohlsdorf as a force to be reckoned with. The only complaints about this book are ticky-tack and technical. Pistols are loaded with magazines not “clips.” Also, the LAPD, which comes across as even more bumbling than the Keystone Kops, haven’t carried revolvers since the Smith & Wesson Model 15 was phased out in the late 1980s. Other than these specks of dirt, Wohlsdorf’s debut excels as a paranoia-inducing rebuttal to modern humanity’s quest for omnipresent security.