Secrets of a Marine's Wife: A True Story of Marriage, Obsession, and Murder 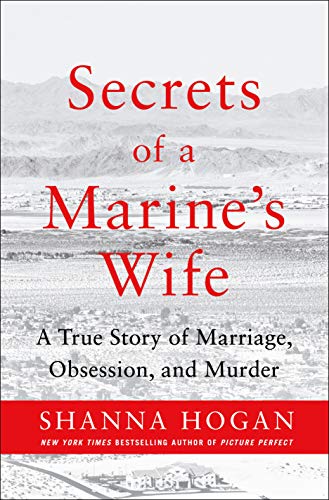 “Anyone who likes a good mystery will find Secrets of a Marine’s Wife an intriguing and satisfying read.”

In 1994 when Truman Capote wrote In Cold Blood he started, or at least enhanced, a trend of creative nonfiction that surpassed many fiction thrillers. Shanna Hogan’s Secrets of a Marine’s Wife: A True Story of Marriage, Obsession, and Murder is comparable in style and depth with Capote.

The tale of Erin Corwin, a young woman of just 19 years when she died, is a compelling story from the very opening pages through to the last words. Hogan’s writing style compliments a story that could be fiction if it were not such a gruesome, true story.

The book opens with the discovery of Erin’s body in a deep mineshaft north of Joshua Tree National Park in California. Erin had been missing for seven weeks and the search was coming close to an unsuccessful finish when a volunteer caver, Luca Chiarabini noticed a stench from an abandoned mine —a smell that could only spell disaster. “A festering odor wafted from the derelict mine shaft on the edge of the remote Mojave Desert . . .”

As the mine was searched, Erin’s body was discovered in deep stages of decay. Thus the stage is set for a mesmerizing story to begin to unfold, as Hogan takes the reader back to before the beginning, back to when Erin was a child.

And this is key to Hogan’s writing. Throughout the book, Hogan details the many people involved in Erin’s life: her parents, her friends, her husband, her neighbors, the authorities involved in finding her—no one is overlooked.

Reading about these people—the good, the bad, and the ugly—one senses reading a well plotted novel. Unfortunately, this novel is all too true.

From the discovery of Erin’s body, the story backtracks to Erin’s life, focusing on her relationship with her high school boyfriend, Jon Corwin, and their whirlwind marriage right out of high school. Jon always wanted to be a marine, and when their chance came, they married in a small ceremony then took up lodging at Twentynine Palms Marine Base, east of Los Angeles.

Although cautioned by her mother that she might encounter loneliness and perhaps she and Jon had taken a step too soon, Erin was in love and determined be a successful wife and mother.

An outgoing young woman, Erin easily made friends on the base, especially with two other couples: Chris and Nicole Lee, and Conor and Aisling Malakies. “At first glance, it appeared like three young, wholesome families beginning their lives together in the shadows of the military. But their connection was cursed.”

Military bases are all about family, and the three couples became quite close. Perhaps after some time, a little too close. A relationship began to develop between Chris and Erin and soon Erin’s marriage began to crumble. The affair was discovered and although both Chris and Erin vowed to end it, that did not happen.

And then Erin went missing, and as news about their affair crept into the files of the local police, Chris became the person of most interest. His lies were patently obvious and soon spun out of control; all the while he denied knowing anything about Erin’s disappearance.

If this is all there was to the book, it would still be a good read, but the manner in which Hogan handles the story, unfolding it through research, dialogue, interviews, and even diving into the thoughts of the various characters, is the most intriguing part of the story.

The reader knows, or certainly has a good sense where the story is going but is clearly led from one clue to the next to the next through Hogan’s strong ability to lay the groundwork in an interesting and page-turning way. She leaves no stone unturned from the discovery of Erin’s body in the beginning, to the trial and closure on the last page.

Although it is a wretched story, it unfolds clearly through Hogan’s empathy for everyone involved. “One evil man extinguished Erin’s life, but hundreds of good people sacrificed so much to bring her family justice.”

Anyone who likes a good mystery will find Secrets of a Marine’s Wife an intriguing and satisfying read.