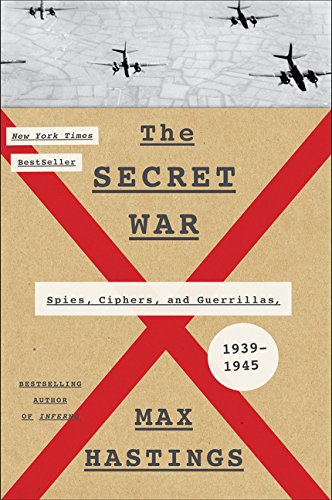 “a single overarching volume on World War II espionage and covert action that has long been missing . . .”

There have been a number of recent books and movies romanticizing the role of espionage on the outcome of World War II; however, the actual impact of spies, code breakers, and covert operatives on the outcome of the war is both more complicated and tragic.

Max Hastings, renowned military historian and the author of several bestselling books on World War II, has written a marvelous and sweeping narrative of this aspect of the war, seeking not only to correct many myths and false histories, but offer a balanced assessment of what spies and covert operatives actually accomplished in the war.

What makes this book notable is that Hastings goes beyond the usual topics such as the Bletchley code breakers popularized in the recent movie, The Imitation Game, or the Allied deception operations prior to D-Day to look at the German, Russian, Japanese, and even Italian spy organizations, offering a balanced assessment of each country’s spies and spy masters and providing details on many operations, especially Russian operations not well known to Western readers.

Although acknowledging the strategic importance to the Allies of breaking Germany’s Enigma encryption machine, arguably the most significant intelligence achievement of the war, Hastings offers insightful conclusions that while the Ultra program intelligence was often strategically useful, on a tactical level it was much less useful, particularly early in the war when the British didn’t have the military forces to take advantage of the intelligence Ultra provided.

From a historiography perspective, this book finally does justice to the long-neglected story of the massive Soviet espionage apparatus and the many previously unknown contributions of Soviet spies and guerillas to the Red Army’s war effort.

The Soviet Union’s spy organization dwarfed the other Allies in terms of people and resources, and Stalin’s paranoia ensured that the Soviets not only spied on their enemies, but also continued to collect intelligence on their Allies throughout the war.

Incredibly, Stalin’s personal delusions and paranoia not only subjected Soviet intelligence organizations to the same crippling purges that swept many gifted Red Army officers to an early grave, they caused him to ignore multiple clear warnings that the Germans were planning to invade Russia in June 1941.

Through fear of offending their leader, Soviet intelligence officers told Stalin only what they thought he wanted to hear, and Stalin ignored any intelligence that did not fit his own world-view. As a consequence, the Red Army was caught mostly unprepared and suffered huge losses in the first six months of the invasion.

Once the war began, Stalin showed a particular ruthlessness toward sabotage and espionage that would be unacceptable in the West, and Hastings makes a pretty good case that the disastrous Soviet Operation Mars attack near Moscow, launched at about the same time as the offensive at Stalingrad that encircled the German Sixth Army, was nothing more than an elaborate ruse that was leaked to the Germans to divert attention from Stalingrad. This elaborate deception cost the Soviets over 200,000 casualties and showed the sacrifice Stalin was willing to extract from his soldiers to achieve victory.

In addition, Hastings provides a balanced look at the Axis powers and their intelligence efforts. Although the main German intelligence service, the Abwehr, has been treated by historians as hopelessly incompetent, a viewpoint Hastings shares, German counter-intelligence was ruthlessly effective at not only identifying and dismantling many resistance networks, especially in Holland, but thwarting most British and American attempts to build large and successful spy networks within Germany.

The Germans also had substantial codebreaking success against the British, and read British convoy message traffic for almost as long as the British Ultra read German signals. Hastings wryly points out that only mutual incompetence and certainty in the unbreakable nature of their own codes kept the British and Germans from determining their encryption vulnerabilities.

The Japanese get much shorter shrift from Hastings. Their intelligence services were hobbled by the same challenges as their Soviet counterparts; Japanese military leaders simply discounted any intelligence that didn’t comport to their world view. The American code breaking efforts against the Japanese, which proved both strategically and tactically decisive at the Battle of Midway, were never suspected by the Japanese who were never able to gather useful information on the American military throughout the Pacific campaign.

Hastings pulls no punches and slays a lot of sacred cows in this book, especially when it comes to the impact of Ultra intelligence and the effectiveness of the numerous Allied covert action and sabotage efforts undertaken by the British Special Operations Executive (SOE) and the American Office of Strategic Services (OSS). His most telling assessment was that the British had the most effective intelligence services not because they had great spy networks or brilliant analysts, but because they were the least incompetent of the major combatants.

The actual conduct and impact of espionage and covert action on the outcome of World War II has never really been assessed in a holistic manner, and Hastings excellently fills that gap. This book is highly recommended as a single overarching volume on World War II espionage and covert action that has long been missing from the war’s historiography.