The Secret Holocaust Diaries: The Untold Story of Nonna Bannister 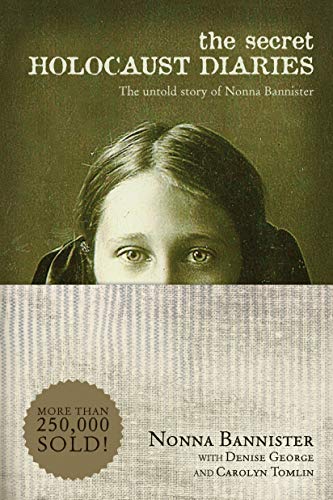 The striped ticking pillow that Nonna Lisowskaja carried around her waist as a child caught in the crossfire of World War II becomes an historical treasure revealed only after her death with the help of her husband and two editors.

Nonna, the lone survivor of her entire family, tells her story based on diary notes she wrote as her life unfolded before her. We learn more about the desperation of Russian soldiers in German-occupied Russia through her eyes. Nonna’s family remains in Russia, even as the Germans seize control, in the hopes that their neutrality will keep them safe. But in war, neutrality breeds enemies on all sides.

This intelligent young girl, who knows five languages, experiences firsthand how deadly the question “Do you speak Jiddish?” can be. In Nonna’s world, knowledge and kindness become liabilities. The gray areas between truth and deception help her survive. She sees kindness and generosity as well as the heartbreak of betrayal and death all around her.

“I slid through the opening in our door, and down to the ground. The Germans were very busy, and if they saw me, they didn’t say anything. I ran over to the Jewish railcar, and handed the chunk of bread to this young boy, . . .” As we can predict, there are serious consequences for Nonna’s kindness. One by one, Nonna guides the reader through the splendors and the horrors of her childhood as a Holocaust survivor. Readers get an unmistakable understanding of German torture techniques that were used during World War II.

This is a powerful story. However, the book’s format is distracting to the reader because it pushes aside Nonna’s voice in order to expound upon historical facts and information about World War II and the Holocaust. Editors made a mistake when choosing this format for Nonna’s story because it interrupts the flow of Nonna’s message. While some background information from the editors was informative, it should not have been offered at the expense of the author’s voice.