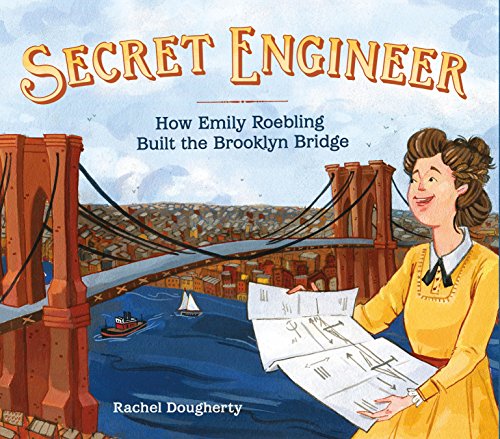 “a good job of explaining the mechanics of bridge building”

The way caissons were used is particularly well described. Any budding engineer will be fascinated to learn how caissons both broke into the ground below the water and provided a place for men to work with breathable air. Supposedly breathable, as it turned out, with many workers falling sick with “caisson disease,” including Emily's engineer husband, Washington, who was charged with building the bridge.

While the book clearly explains the structural challenges and the new technologies used in such a massive project, the text is less successful at portraying Emily. The opening sentence is a cliché of every book about a girl breaking the feminine stereotype, “Emily Warren was a bright, shiny spark who loved to learn.”

What isn't described (except in the author's note) is how her older brother saw her talent and supported her education. Nor does the text give much credit to her husband for encouraging his wife to act as his partner. It's important to acknowledge that feminism isn't just important to girls. It's vital for boys and men as well.

Where the book really sings is once Emily takes over the project from her ill husband and learns basic engineering. The cables, the stays, the deck are all beautifully described. This is also the part of the book with the best art. In some ways, the story would have worked better as a biography of the bridge rather than a biography of Emily. It's definitely the most powerful character in the book.

It would be interesting to compare Frieda Wishingsky's version of this story, illustrated by Natalie Nelson. That picture book, How Emily Saved the Bridge: The Story of Emily Warren Roebling and the Building of the Brooklyn Bridge, comes out in May 2019.