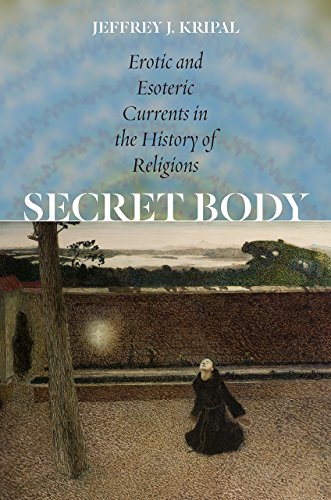 Surprisingly few historians and scholars of religion seriously consider what vast numbers of Americans actually believe and experience in their spiritual lives. Jeffrey J. Kripal, a professor of philosophy and religious thought at Rice University, is the extraordinary exception.

Countless others have achieved profound mystical states through the practice of yoga, meditation, fasting, prayer, sensory deprivation, hyperventilation, tantric sex, or the ingestion of psychedelic drugs or sacred plant medicines.

“I am especially interested in such histories,” he writes, “because I have come to think that very similar psychical phenomena lie at the core of the history of religions, right behind what we have traditionally called ‘myth,’ ‘miracle,’ and ‘magic.’”

Kripal describes his new book, Secret Body, as “an excessive and eccentric autobiography.”

He is a serious intellectual, but one who wears his heart on his sleeve. He writes with sensitivity and self-deprecating humor about growing up as an overly devout Catholic boy in the American Midwest, including his post-pubescent attempts to starve himself to death as a way to achieve saintly perfection.

He blends these stories with reprinted essays from past work and attempts to answer his critics, who are legion. This structure is the main flaw in a book that often sparkles with insight and inspires the  reader to think, “I never thought of it that way.”

Kripal sometimes comes off as a man too impressed with his own ideas. He quotes himself more than the pope. He is repetitive, sometimes intentionally and sometimes because of poor editing.

He is provocative, whether targeting the Christian Right, the New Atheists, or academic colleagues in the humanities and the sciences.

By refusing to seriously consider the mystery of human consciousness, and by dismissing anything that smells like “spirituality,” academicians have, in Kripal’s mind, become as close-minded as the religious fundamentalists they love to mock. In Kripal’s view, we make a tragic mistake when we dismiss or explain away paranormal events with mechanistic thinking and rational reductionism.

“They will never be understood in mechanistic terms because they are not about mechanisms. They are about meaning. They are about narrative or, if you prefer, ‘myth.’ They are about realms and dimensions of sociality and collective life about which our classic social theories and secular flatbed ontologies have barely a clue.”

Kripal is heterosexual, but he is a straight guy with a keen eye for the homoerotic subtext of scripture, whether those sacred texts are the writings of Hindu saints and Christian apostles.

In a chapter titled “On the Fiction of a Straight Jesus,” he calls out the Christian “family values” crowd.

They worship “the scripturally preserved memories of a man who does not appear to have been married, who bore no children, who raised no family, who hung out with sex workers and sinners, who counseled his listeners to hate their parents and leave their families to follow him, who liked to eat and to drink (with people with whom he was not supposed to eat and drink), who objected to much of his own pious Jewish culture, whose most cherished beloved was another man, who encouraged his most devoted male followers to castrate (or feminize) themselves for the kingdom of heaven, who left his disciples the truly scandalous ritual of consuming his own flesh and fluids within a love-meal outrageously modeled after the holiest ritual of his own religion, and who was ultimately executed by the state in the gruesome ‘electric chair’ of his time, that is crucifixion.”

And you thought the UFOlogists had some strange beliefs!