Secrecy World: Inside the Panama Papers Investigation of Illicit Money Networks and the Global Elite 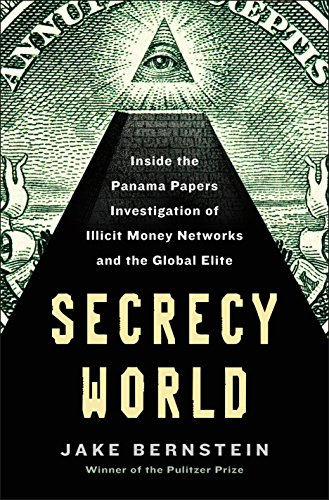 One of the great rallying cries of politics in the 21st century is anxiety over rising income inequality. While many different people point to different explanations, most on both the left and right side of the spectrum admit that in the developed world, top earners are making demonstrably more than even what used to be called the upper middle class. As for the nominal middle class and the working poor, wages have stagnated, opportunities have dried up, and families have fallen apart due to despair, drug abuse, and an overwhelming feeling that the game called life is rigged.

Secrecy World by Jake Bernstein will not put these bad thoughts to bed. Indeed, this well-researched book is an exclusive look at how the world’s mega wealthy hide their money in offshore accounts.

Thanks to tax havens like Singapore, the British Virgin Islands, Luxembourg, and Delaware, billionaires around the world can avoid their nation’s taxman for generations. Without this revenue, countries throughout the world have found themselves in the position of demanding austerity measures on their citizens while letting the smart set enjoy their billions without paying back their “fair share.”

Bernstein is one of the well-regarded members of International Consortium of Investigative Journalists (ICIJ), a global body of top-tier scribblers who first made their name by publishing stories about the offshore industry.

For much of Secrecy World, Bernstein recounts how the ICIJ formed and how it came to acquire and ultimately published the “Panama Papers,” a data dump that conclusively proved that some of the wealthiest people in the world use lax tax laws in order to hold millions in assets behind the screens of shell companies.

Big names appear in this book—U.S. President Donald Trump, Russian President Vladimir Putin, Chinese President Xi Jingping, E.U. President Jean-Claude Juncker, and many others. Politicians of all stripes, from Green Party representatives in Paris to the pro-market prime minister of Iceland, appear to have damaging connections to “secret money,” and so too do star athletes, famous actors, and other members of the world’s elite.

But as Bernstein frequently notes, transnational corporations are the biggest offenders of using “secret money” in order to build and keep their wealth. Secrecy World is an eye-opening look at how banks in Switzerland and Luxembourg, law firms in Hong Kong, and one particular company in Panama helped to cover for drug traffickers, arms dealers, and supposedly law-abiding companies. The chief antagonist in this work is “Mossfon,” a Panama-based company that sold shell companies by the hundreds for decades. Mossfon is the octopus at the head of the endemic corruption profiled in Secrecy World.

Bernstein’s book is definitely not for novices. Secrecy World deals quite a bit with the ins and outs of international finance, and Bernstein is guilty of inundating his audience with economic lingo. Such an alphabet soup approach may turn off even interested parties.

However, despite the cold way in which Bernstein writes, there is a simmering fire of righteous rage underneath this book. Bernstein believes that the world’s wealthy are not paying into the national systems that made them wealthy in the first place. He also excoriates those laissez-faire organizations which give intellectual succor to nefarious business practices. There is certainly plenty of proof in Secrecy World to validate Bernstein’s anger.