The Second Coming of the KKK: The Ku Klux Klan of the 1920s and the American Political Tradition 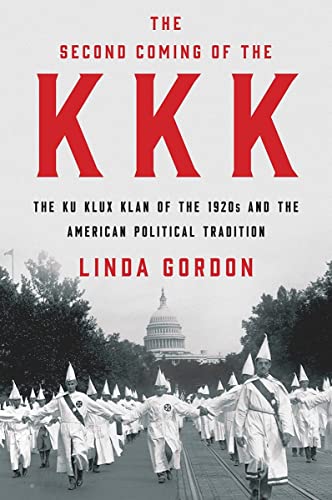 “Gordon argues that the Klan represents how some of the most primitive political passions are rooted in fear and hatred of otherness—and a willingness to exploit these sentiments for purpose, power, and profit.”

We are living through the third incarnation of the Ku Klux Klan (KKK), today’s but a sad ghost of yesteryear’s fearful organizations. This iteration is neither as vicious nor as vindictive as the two previous movements, more a ragtag assortment of the alt-right that rallied in Charlottesville, VA, and appears at other political hot spots.

The two earlier movements were relatively short-lived, but raised much hell. The first generation arouse in the wake of the South’s defeat in the Civil War and efforts to implement Reconstruction, from 1866 to 1879. The second version emerged in the pre-World War I era and flourished during the tumultuous Roaring ’20s, from 1915 to 1927. Each appealed to native-born, Protestant white Americans and did so in different ways, but each inflicted much pain and suffering.

Linda Gordon, an NYU history professor, thoughtfully examines what she calls the Klan’s “second coming,” the Klan of the 1920s. Her book is invaluable for readers a century later because it deconstructs the old adage, the more things change the more they remain the same. The past is a roadmap to the present.

Gordon argues that the Klan represents how some of the most primitive political passions are rooted in fear and hatred of otherness—and a willingness to exploit these sentiments for purpose, power, and profit.

Hatred of another group is as old as humanity and is an intimate feature of America’s “soul,” the nation’s socio-personal, political values and beliefs. It signifies the great fear of difference that helped shape the country’s history, especially over the last 150 years. It was bitterly expressed in the two preceding Klan incarnations. Those targeted by this rage were seen as different, a threat, and, accordingly, assailed in words and wars.

The original movement was a more limited, select, and secret organization, with elaborate rituals and costumes. Its principle purpose was to terrorize the recently freed Southern African American population with attacks by hooded, cross-burning night-riders and many lynchings.

Gordon pinpoints two events that triggered the rise of “second” wave of the Klan —on March 3, 1915, when D. W. Griffith’s movie, Birth of a Nation, premiered in Times Square, and on August 17, 1915, when Leo Frank, an Atlanta factory superintendent who was lynched for alleged murder of a 13-year-old employee, Mary Phagan. They ignited the fires of American primitivism.

More important, it employed the services of “modern” public-relations professionals who exploited smart advertising, press releases, trained recruiters, free membership for ministers, the collection of dues and sale of its regalia to build a powerful—and profitable!—national organization.

At its height in the mid-1920s, it claimed between two and five million members and elected hundreds of its members to public office, including governors and congressmen. It played a critical role in securing the passage of eugenics laws in 30 states and passage of mean-spirited anti-immigrations laws as well as supported the adoption of the 18th Amendment (i.e. establishing Prohibition) and the 19th Amendment (i.e. giving white women the vote).

Gordon identifies a half dozen factors that helped fuel the Klan’s second coming: the mystique of its original incarnation; deep-seated nativism, especially opposition to immigration; deep adherence to conservative evangelical Christian beliefs; alignment with conservative “fraternal” organizations (e.g. the Masons); strong advocacy of abstinence and suspicion of city dwellers with alleged “loose morals,” especially recent immigrants and those supposedly better educated, secular and liberal; and a fervent reactionary “populism” grounded in hatred of those different.

“Never an aberration, the KKK may actually have enunciated values with which a majority of 1920s Americans agreed,” Gordon warns. She adds, “But the Klannish spin whirled these ideas into greater intensity.”

As the organization grew, its leadership was handsomely rewarded. This fueled rivalries and led to revelations about improper practices involving local, state, and national male leaders. Many were accused of immoral conduct, including drinking alcohol, visiting prostitutes, and committing adultery as well as corruptions, including theft of Klan monies; one state leader was convicted of murder, after kidnapping and raping his secretary. Scandals killed the Klan’s second coming.

One of the book’s most revealing discussions involves the role of women in the 1920s Klan. There were at least a half million women in the organization (some claim three million) and they formed their own parallel organization, the Women of the KKK (WKKK). These were early conservative “feminists” who accepted the traditional gender order and promoted women’s rights within it.

Gordon paints revealing portraits of three important Klan feminists. Elizabeth Tyler, the PR professional who helped reposition the organization and is described as a “driven, bold, corrupt, and precociously entrepreneurial woman”; Daisy Barr, a Quaker who served as a leading spokesperson and chief recruiter who enriched herself through profitable schemes; and Alma White, who headed the Pillar of Fire religious order that included 52 churches, two colleges, seven divinity schools, two radio networks, and ten magazines and newsletters, and who claimed the Klan had divine authority. Gordon notes that they were “experienced at organizing large events, state of the art in managing money [and] unafraid to attract publicity.” She identifies them as “thoroughly modern women.”

In a concluding coda, Gordon argues her strongest case with regard to the all-important distinction between the Klan and the then-growing movement of fascism in Europe. The Klan “was part of a group of movements around the globe that have come to be called right-wing populism.” But, she argues, “luckily the 1920s Klan appeared in a country with long-imbedded electoral procedures.”

She points out that the Klan didn’t enlist the super-rich, corporate capital (e.g. Henry Ford, a staunch anti-Semitic) nor did it romanticized violence like followers of Mussolini and Hitler. Her argument should be carefully considered by those who think that the U.S. under President Trump is becoming a fascist state.

We can be grateful that today’s Klan is not that of its two earlier incarnations. Sadly, the underlying forces that drove the second coming—e.g. racism, fear of immigrants, evangelical Christianity, and economic uncertainty—remain defining issues of 21st century America’s social and political life. As much as things have changed over the last century, they seem sometimes oh-so familiar or, as Yogi Berra once observed, "It's déjà vu all over again."