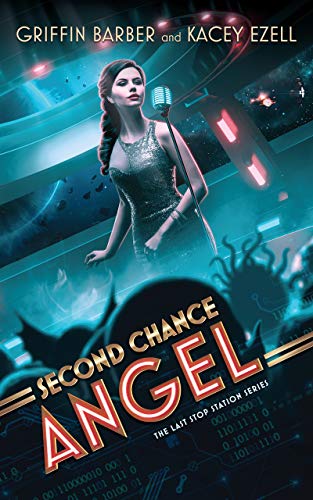 So many sci-fi writers these days want to tackle universe-spanning, insanely huge topics, trying to outperform Larry Niven and Frank Herbert that they fail spectacularly to entertain, which is the main reason for writing a speculative fiction novel. Most people don’t want to be preached to, or led by the nose to a perceived earth-shattering conclusion, they want to have fun. Fortunately, Second Chance Angel forgoes overly complex world building in favor of telling a damn good story.

In the far future humans have seeded the stars after fighting a war on behalf of the mysterious Mentors, the aliens who offered them the stars for military service. The Mentor/Humanity alliance won the war, but Earth was destroyed in the process and the story begins some short years after the conflict. The protagonist is a man by the improbable name of Ralston Muck, a disgraced soldier who now works as a bouncer in a seedy nightclub aboard a space station named Last Stop.

Stripped of his angel, the AI that ran his cybernetic military implants that normally would increase his fighting prowess, Muck relies on illegal pharmaceuticals to mitigate the loss of his angel. Bitter and depressed, he falls for club’s premiere lounge singer, Siren, also a former soldier, but still possessing her angel.

When Siren goes missing, her angel inexplicably winds up in Muck’s body, reinvigorating him and sending them both on a quest to find the singer. Harassed by a corrupt cop, finding themselves in the employ of the local crime lord, Muck and Angel travel off station to track Siren’s abductor, but what they find is more than they bargained for.

A lot of writers would attempt to dazzle the ready with fancy gimcrackery and gizmos, but Barber and Ezell forgo overwhelming the reader, instead they focus on a winding, twisty plot and a noir detective air that drives the reader forward. That’s not to say there isn’t some nifty sci-fi tech, but it takes a dim second to the plot and deft character development. Barber and Ezell also explore the question of what makes a person, is it a physical for, or the emotional/intellectual capacity to interact with any given society? Can AIs be people?

Part mystery, part sci-fi, part thriller, the book strikes just the right balance between all three to create a hell of a read, allowing the reader to become emotionally invested in the story. While the term “page-turner” is often overused in critiques, it applies here in spades.