The Sea and Summer 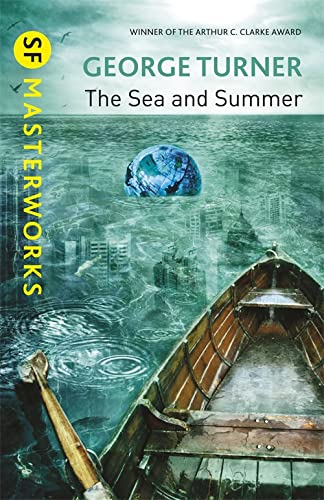 “The Sea and Summer is almost the definition of what good science fiction is about.”

Those of us old enough may remember how easy it was as a young person to find the best, most thrilling science fiction on the library shelves. All you had to do was look for the yellow spines with the Gollancz logo at the bottom. Whatever the book happened to be it was bound to be good.

So it is fitting that Gollancz's SF Masterworks series continues this tradition, making available to a new audience excellent science fiction year after year since 1999. The 2013 list alone is enough to make a sci-fi fan drool, with 21 titles from the likes of Sheri Tepper, Isaac Asimov, Alastair Reynolds, Robert Heinlein, and T. J. Bass.

The Sea and Summer by George Turner sits comfortably in this august company. A family saga set in the crumbling ruins and failing economies of the mid-21st century. Battered by rising seas and soaring global temperatures, failing agriculture and sinking cities, we follow the fortunes of the Conway family—much of it seen through the eyes of the two boys, Teddy and Francis—as it falls from a life of comfort among the Sweet (people with jobs) to the unimaginable poverty of the Swill (the other 90% of people).

It is written in a “literary” style—the kind that attracts awards—but it is nevertheless an intelligent and nuanced look at a possible future, where climate change has happened, where the predictions of the collapse of capitalism in “The Limits to Growth” have come to pass, and where our hapless grandchildren struggle vainly to keep what is left of our society from degenerating into chaos. It should be chastening to us all that The Sea and Summer was first published in 1987, and we are still on the same trajectory.

As the author says in the postscript,

“We talk of leaving a better world to our children but in fact do little more than rub along with day-to-day problems and hope that the longer-range catastrophes will never happen.
“Sooner or later some of them will.
“The Sea and Summer is about the possible cost of complacency.”

The book is written in a “framing narrative” style, from the perspective of an historian in a utopian future (that also faces its own ecological apocalypse) looking back at the bad times in which most of the book is set.

Since the bulk of the novel is presented as the manuscript of a novel (called The Sea and Summer) about those bad times, written by the historian, it is quite easy to imagine this whole framework being removed to leave only the inner novel, without doing any harm at all to the book.

In fact the inner novel does have what seems to be a serious structural flaw in that its second half suddenly veers away from the slow-paced coming of age stories of the two boys and their widowed mother's acceptance of the care and love of the heroic but flawed slum-boss, Billy Kovacs, to become a more action-packed yarn about a nefarious scheme by the society's power elite. It's almost as if the author snaps out of a lit-fic reverie and realizes that some kind of plot better start happening soon.

It's a shame that this change of pace and style spoils the book somewhat, yet it is a very good book all the same. There isn't a sympathetic character in the whole novel (except maybe the historian in the outer narrative), and it is something of a triumph that we can keep on rooting for them because of the recognition we feel for their weaknesses and vulnerabilities.

This is a world we could be living in sooner than we would like, and these are the people we know, the people we are—facing a slow catastrophe with the same paucity of courage, the same lack of internal resources.

The Sea and Summer is almost the definition of what good science fiction is about.