Scholars of Mayhem: My Father's Secret War in Nazi-Occupied France 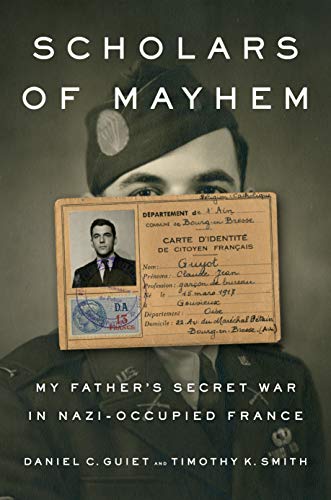 "Scholars of Mayhem has more adventure than an Alister McLean novel even though it is nonfiction!"

Movies just after World War II promised to dramatize stories that now can be told. In fact, many of these tales only now are brought to the public's knowledge. Daniel C. Guiet learned that his father Jean Claude Guiet had parachuted into France the day after D-Day as part of a team that "galvanized thousands of masquisards—rural bands of French guerillas."

Jean Claude and his brother Pierre came to the war late and through William "Wild Bill" Donovan and America's Organization of Strategist Services. After Europe, he went to China to train tribesmen in guerrilla warfare against Japanese and Communist Chinese troops," including "necklaces made of ears and shrunken heads of Japanese soldiers." After the war, he joined the Central Intelligence Agency.

Guiet in Normandy worked for the British Special Operations Executive, "a volunteer organization operating outside the bounds of international law." "An estimated 87 percent of the SOE's original archive no longer exists." Guiet left a memoir for his children, One Man's Lovely Little War.

Made up of "warriors, engineers, cryptographers, forgers, actors, murderers, burglars, and thrives," it gave "the British government deniability for its agent's actions, which were sometimes heroic, occasionally disastrous, and often shocking."

The SOE also had its failures, such as when the Germans compromised its radio network and knew when and where agents would land. Retaliation for the SOE's capture of Strumbannführer Helmut Kämpfe resulted in the executions of 642 people.

For the success that they achieved as guerrillas after D-Day, the SOE agents, "now in command of a large guerrilla army," now had to fight pitched battles with the German army that routinely massacred their family members and neighbors. It had many critics in the Allied forces and its memory quietly disappeared to celebrate the role of the local resistance groups.

Guiet handled the radio against the Germans who "had become very good at radio detection" with his elite team in "Operation Salesman II." The members encouraged the locals in "a covert campaign of sabotage, subversion, and ambush against the German occupiers." "Hunted by Nazis, they lived as woodland nomads." "They helped Jews escape the country and gave assistance to downed Allied airmen."

Scholars of Mayhem has more adventure than an Alister McLean novel even though it is nonfiction! It falls short only that it is sometimes confusing in its telling of events. The book is illustrated.